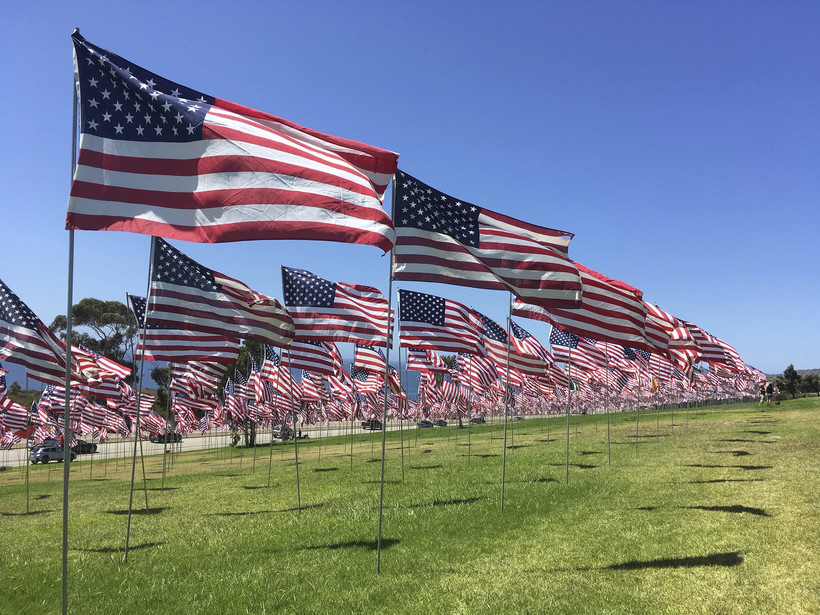 Thousands of flags representing each of the 9/11 terrorist attack victims wave on lawn overlooking the Pacific at Pepperdine University in Malibu, Calif., on Sunday, Sept. 8, 2019. The display is now an annual tradition. John Antczak/AP Photo

20 Years After 9/11 Terrorist Attacks, Veterans Groups Across The State To Commemorate Those Lost

Cities and veterans groups across Wisconsin are gearing up for a weekend of ceremonies commemorating the 20th anniversary of the 9/11 terrorist attacks that killed thousands of citizens and first responders. Organizers say the anniversary is especially significant in light of the U.S. withdrawal of troops from Afghanistan after two decades of war.

In Milwaukee, the War Memorial Center will host a series of events Saturday, starting with a 9/11 remembrance at 8:30 a.m., followed by the opening of a new "Never Forget 9/11" exhibit at 10 a.m.

War Memorial Center CEO and combat veteran Dan Buttery said the exhibit features a section of steel beam from the World Trade Center towers that fell in 2001. He said the memorial services and exhibit aren't just aimed at honoring the victims of the attacks.

"This is also about what we do going forward and how we remember, never forget, those we lost and take their spirit, take their life, take the love for them and put that into something positive," said Buttery.

At 11 a.m. a "Medal of Honor Commemorative Motorcycle Ride" will depart the War Memorial Center and travel to the Wisconsin 9/11 Memorial and Education Center in Kewaskum.

Washington County Executive and Operation Iraqi Freedom veteran Josh Schoemann said he expects around 500 motorcycles to travel the route on their way to the 9/11 Memorial, which was dedicated June 13. He said the events in Kewaskum, like others around the state, are meant to remember the victims of the worst terrorist attack on U.S. soil but also to remember "all the positive things that came from it."

"There are certainly plenty of negatives," said Schoemann. "But America came together like never before and we need to do that again."

Schoemann noted this year's anniversary is especially salient following the withdrawal of U.S. forces after 20 years of war in Afghanistan, and its swift fall to the Taliban. He said now is the time to reflect.

"I think now is the time to look within ourselves as a nation, come together and really think about where we're going from here. And what better day to do it than on 9/11," said Shoemann.

Registrants will climb the equivalent of 110 stories, which is the height of the World Trade Center towers, in six waves. Registration costs between $30 and $40, with proceeds going to the National Fallen Firefighters Foundation.

Pierce Manufacturing events manager, Eric Schmidlkofer, said participants come from across the nation, and world, for the event. So far, he said 2,600 people have registered for this year's climb and will get a commemorative shirt and badge with the name and picture of one of 343 firefighters that died when the Twin Towers fell.

"There's a timeline of events that happened on 9/11 throughout the climb as you walk so you can read those and get a better understanding," said Schmidlkofer. "And we've heard a lot of positive feedback that it's really motivating for people as they're doing the climb."

Schmidlkofer said more than $140,000 has already been raised for the Fallen Firefighters Foundation.

Other 9/11 ceremonies being held across the state include: