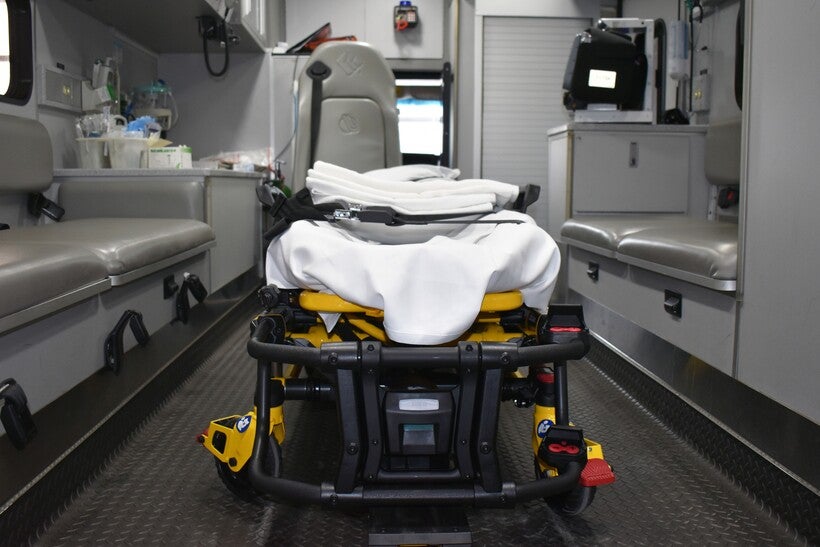 Ambulances like this one pictured on Feb. 11, 2021, are outfitted with equipment that can keep people alive while rural agencies often travel long distances to get people care. But, many rural services are struggling to operate due to a shortage of staff and volunteers, long distances and inadequate financing. Danielle Kaeding/WPR

2 Wisconsin Towns Had No Guarantee Help Would Come If Someone Dialed 911. That’s About To Change.

After more than six months without it, two northern Wisconsin towns are hoping to once again offer ambulance service to residents.

The towns of Gordon, Shanagolden and Marengo lost ambulance service in January after their former provider notified six towns last summer that it would not renew their contracts to provide emergency services. While others were able to find a provider, the three towns have been working with state health officials and others to restore emergency medical service.

Marengo was the first to restore service in March, but the remaining two towns have been relying on nearby providers to answer 911 calls. Now, the towns of Shanagolden, Gordon, Peeksville and Jacobs have signed a contract with the goal of beginning ambulance service on July 20 through the Glidden Area Emergency Medical Service.

Glidden Area EMS has previously been operating as a first responder service, providing care on the scene but no transport.

"Everybody is like breathing a sigh of relief and hoping nothing terrible happens in the meantime," said Doug Thorp, chair for the Town of Gordon.

Fortunately, all calls since Jan. 1 have been answered by a surrounding provider, said Thorp. The town averages around 30 calls for ambulance service each year. Under the new service, he expects Glidden Area EMS will respond to roughly 100 calls. Gordon is chipping in around $53,000 each year under the new contract, said Thorp.

The biggest obstacle for the towns has been finding enough people willing to staff the service, which relies on volunteers. A 2013 survey of state emergency medical service providers found more than half of agencies that responded were run by volunteers. Around 92 percent of Wisconsin fire departments are also staffed by volunteers.

Cari Broge, service director for Glidden Area EMS, said it’s been difficult to find people who are willing to complete the coursework and testing requirements to become a first responder or emergency medical technician. She said classes can cost individuals anywhere from $500 to more than $1,500 depending on the level of certification they’re pursuing.

"It is a lot of work, especially a lot of the people that we are reaching out to (who) already have a full-time job, they’ve got family, so it is a lot to get through those classes," said Broge. "But, then, there's the National Registry test at the end, and a lot of people find that very difficult and have a hard time getting through that."

Volunteers must pass the National Registry of Emergency Medical Technicians exam to be licensed or certified in the state. Republican lawmakers introduced legislation earlier this year to make the exam optional for first responders also known as emergency medical responders. The bill was passed by the state Senate, but it has not passed the full Legislature. 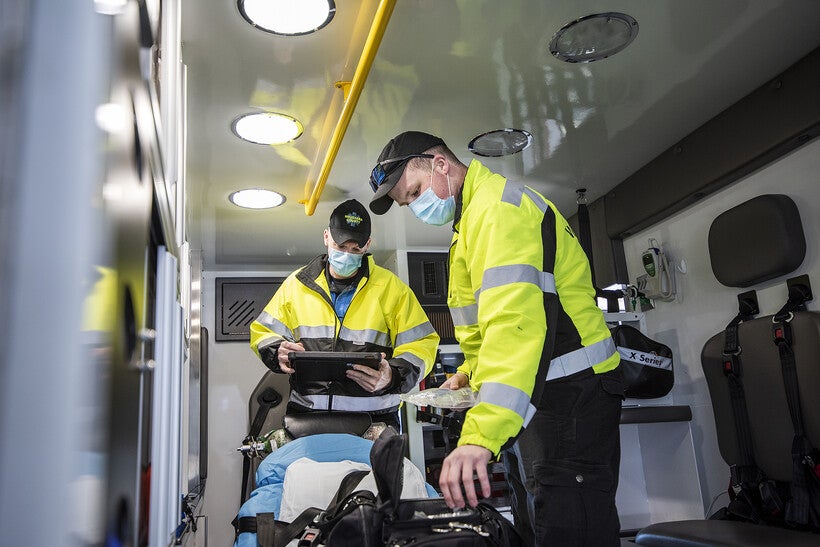 Paramedics Sean Mueller, center, and Frank Rohl, right, check one of the two ambulances at their station to ensure that their supplies are not expired Tuesday, Feb. 16, 2021, in Wild Rose, Wis. Angela Major/WPR

Lawmakers and some EMS services argue the bill removes barriers to recruitment and retention of emergency services personnel while health experts fear such proposals pit the need for volunteers against patient care. State health officials have argued that people should be paid to respond to emergencies rather than relying on good will alone.

In the meantime, Broge said she has seven people who are staffing the volunteer service with three new recruits going through the testing and credentialing process. The service has been filling out paperwork with the state and meeting inspection requirements to become operational.

Glidden Area EMS has to verify that they have the ambulance, equipment and staffing to begin operating, according to Don Kimlicka, regional EMS coordinator for the Wisconsin Department of Health Services.

Kimlicka said they suggest a staff of at least six people for an EMT level service that transports patients to surrounding hospitals and medical centers. He noted it’s very difficult for services in rural Wisconsin to provide a higher level of care beyond that.

"It all depends on the township or the area and what they can provide and afford," said Kimlicka.

Kimlicka said funding is tough for towns, which are mandated to provide ambulance service in Wisconsin. He said that’s unlike cities, villages and counties that have a larger population base to support emergency medical services. A report earlier this year from the Rural Policy Research Institute at the University of Iowa found rural communities that have a lower volume of calls often face more financial hardship than their urban counterparts.

"In Wisconsin, ambulance services or emergency medical services is not considered an essential service, and, therefore, they do not have to provide funding or have the ability to reach out for extra funding, such as tax levies," said Kimlicka.

The state has restricted the amount of money local governments can raise through property taxes since 2006. EMS services typically rely on a mix of public and private funding, and ambulance service providers may be unable to recoup their costs for a variety of reasons. People may be uninsured and unable to pay for an ambulance run, insurers may be unwilling to cover costs, and state and federal programs like Medicare may not provide enough reimbursement.

Kimlicka, who’s been a licensed EMS provider for 40 years, said volunteerism has faded away as people contend with constraints from work and family life. He noted that even services with paid employees like the Ashland Fire Department have struggled to attract workers, adding that the COVID-19 pandemic has only made the problem worse.

"The pandemic just drove it down very quickly that now it's a serious matter where there's a lot of communities that don't have people readily available, and you may or may not get somebody to respond in a timely manner," he said.

Gordon’s Thorp noted that two EMTs with the ambulance service will be based within one of the communities that will be served, allowing quicker response times. But, he noted it still may be 20 minutes or more before an ambulance arrives.

While they’ve come a long way, he said they’re continuing to work out issues like funding. Thorp added the towns of Jacobs and Peeksville already have an existing contract with Marshfield Clinic for ambulance service. He’s hoping they’ll pro-rate the service and end the arrangement early to free up funds to support Glidden Area EMS.

Jeff Euclide, chief administrative officer for Marshfield Medical Center-Park Falls, didn't say whether they'd be willing to end the contract early. In a statement Thursday, he said the Marshfield Clinic Health System was among those who stepped in to fill the gap in emergency services when the previous provider backed away.

"Ensuring excellent emergency services is the goal," said Euclide. "We are committed to working closely with all stakeholders to make sure this goal is met in the best possible way."