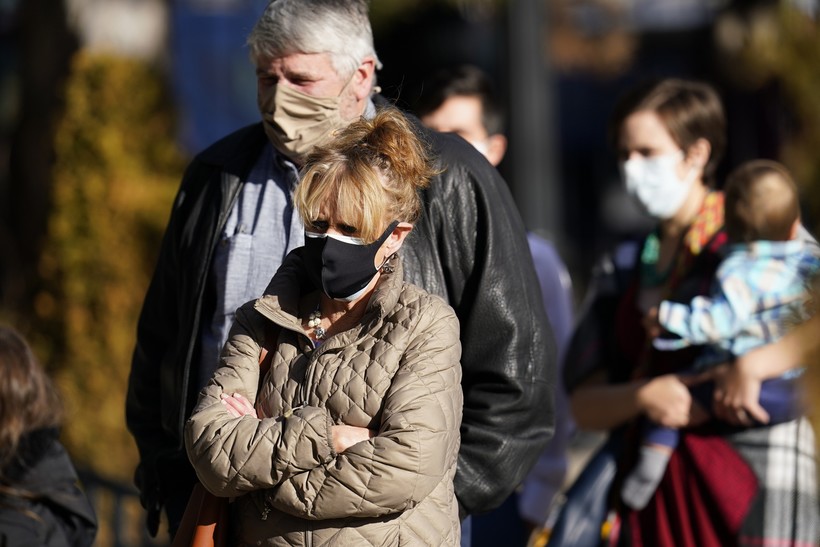 Parishioners queue up to enter Cathedral Basilica of the Immaculate Conception Thursday, Dec. 24, 2020, in downtown Denver. Attendance was limited during the coronavirus pandemic. David Zalubowski/AP Photo

New reports of COVID-19 cases are higher than they were in recent days in Wisconsin, based on the latest data published by the state Department of Health Services.

In addition, DHS officials said Tuesday that they would be issuing daily reports on the status of the ongoing vaccination effort across the state.

DHS reported 2,384 new cases of the disease Tuesday, bringing the average for the past seven days to 1,931 daily cases.

There were 72 new deaths from COVID-19 reported Tuesday. On Tuesday, 3,633 tested negative.

Of the people who got tested for COVID-19 over the past week, 25.4 percent were positive for the disease, according to DHS. That rate has been holding steady — with some fluctuations — in recent days.

On Sept. 30, DHS also introduced an alternative positivity rate, one that measures the percentage of tests that are positive, instead of the percentage of people who get a positive result. The new metric takes into account people who have been tested multiple times. The seven-day average for that number is at 8.9 percent.

On Tuesday, DHS officials began sharing vaccine data information, which will be updated daily. According to a DHS news release, the vaccine data includes "summary metrics for allocation, shipment and total vaccine administered, as well as a graph displaying the number of vaccinations administered per day."

"We are committed to providing the public with timely COVID-19 vaccine information," DHS Secretary Andrea Palm said in the news release. "Even though we're in the early stages of the Wisconsin COVID-19 Vaccine Program, it is important for Wisconsinites to know where we stand and highlight the unprecedented work being done by COVID-19 vaccinators across the state."

According to the Wisconsin Hospital Association, there were 1,082 COVID-19 patients hospitalized as of Tuesday. A total of 21,081 people have been hospitalized because of the disease, or 4.4 percent of all positive cases.

The latest figures bring the overall total of positive cases in Wisconsin to 474,537, according to DHS. A total of 4,783 people in Wisconsin have died from COVID-19.

As of last Wednesday, all seven of Wisconsin's regions had "very high" levels of activity. All regions besides the Western part of the state are "shrinking" in activity, according to DHS.

Wisconsin's daily testing capacity — based on the availability of test supplies and adequate staffing — has grown from 120 available lab tests in early March to 59,185 as of Tuesday. The number of actual people with new test results reported Tuesday was 6,017.