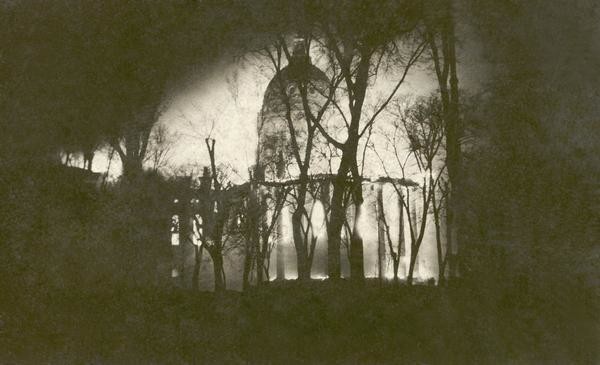 Early in the morning on Feb. 27, 1904, a fire destroyed Wisconsin’s state Capitol building and nearly led the state government to another city.

The fire began when a gas jet used for lighting set fire to recently varnished woodwork in a closet on the second floor around 2:30 a.m. Night watchman Nat Crampton was the first to spot the fire, which soon turned into one of the largest in Madison’s history.

Among those to join in to fight the blaze was Gov. Robert La Follette, who rushed to the square when news of the fire reached him at home around 4 a.m. La Follette ran into the burning building and personally directed the effort to save documents, files, books and paintings. Drenched from head to toe, La Follette kept at it for about three hours when a doctor dragged him back to the executive residence to change into dry clothes. He was back within the hour and helped rescue documents in the basement.

Firefighters battled the blaze for 18 hours.

The state Capitol, Wisconsin’s third, housed all of the state offices at the time. Lost to the fire were the records of the Civil War and Spanish American War from the Grand Army of the Republic Hall and the stuffed remains of Wisconsin’s famous Civil War eagle, "Old Abe."

Several Wisconsin cities saw the burned out building as a chance to become capital cities themselves, and it wasn’t the first time.

Throughout the 19th century, Madison had battled other cities to hold on to the state government. Milwaukee made the most eager bid this time with state Sen. Charles Cassius Rogers introducing a bill calling for the transfer of the Wisconsin state Capitol to Milwaukee. La Follette was among those to oppose the idea, and others agreed after realizing the laws and amendments to the state Constitution necessary to enact such a move.

Only a few repairs were made to the Capitol after the fire. The East and West wings were destroyed along with most of the rotunda and South Wing. The North Wing was largely untouched and remained in use during the construction of the new capitol. Construction on the new building began in the fall of 1906 and was finally complete in 1917.