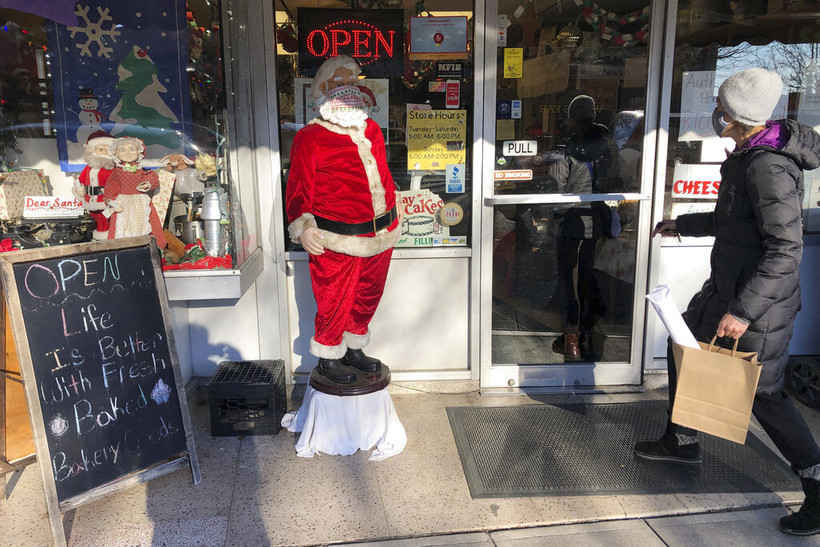 A Santa Claus figure wears a face mask in front of a bakery during the coronavirus pandemic in Rutherford, New Jersey, on Wednesday, December 23, 2020. Ted Shaffrey/AP Photo

Reported Numbers Tend To Be Lower On Mondays
By WPR Staff
Share:

New reports of COVID-19 cases in Wisconsin appeared lower on Monday than in recent days, based on the latest data published by the state Department of Health Services.

DHS reported 1,335 new cases of the disease Monday, bringing the average for the past seven days to 1,934 daily cases.

These numbers are slightly lower than those from the past few days. For context, it's typical for DHS to report fewer confirmed COVID-19 cases on Mondays, with labs usually posting fewer test results the day before.

There were 19 new deaths from COVID-19 reported Monday. On Monday, 3,836 tested negative.

Of the people who got tested for COVID-19 over the past week, 24.6 percent were positive for the disease, according to DHS. That rate has been holding steady in recent days.

On Sept. 30, DHS also introduced an alternative positivity rate, one that measures the percentage of tests that are positive, instead of the percentage of people who get a positive result. The new metric takes into account people who have been tested multiple times. The seven-day average for that number is at 8.2 percent.

According to the Wisconsin Hospital Association, there were 1,113 COVID-19 patients hospitalized as of Monday. A total of 20,911 people have been hospitalized because of the disease, or 4.4 percent of all positive cases.

The latest figures bring the overall total of positive cases in Wisconsin to 438,394, according to DHS. A total of 4,711 people in Wisconsin have died from COVID-19.

As of last Wednesday, all seven of Wisconsin's regions had "very high" levels of activity. All regions besides the Western part of the state are "shrinking" in activity, according to DHS.

Wisconsin's daily testing capacity — based on the availability of test supplies and adequate staffing — has grown from 120 available lab tests in early March to 59,185 as of Monday. The number of actual people with new test results reported Sunday was 9,350.