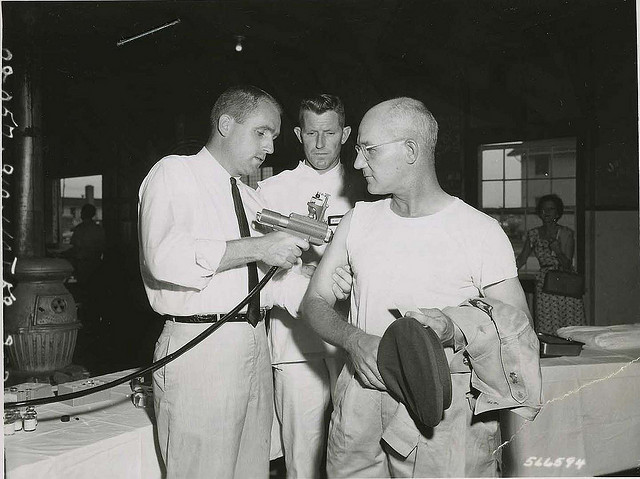 Now that there’s a measles outbreak, it’s time for me to harp again on vaccinations.

First of all, I was not always as pro-vaccine as I am now. Being a child of the 1960s, I thought for a while that vaccines were a communist plot to ruin our children. Well, that’s not exactly what I thought, but let’s just say that my “youthful exuberance” got in the way of scientific fact.

Vaccines work. No doubt about it. Those who say they don’t should travel back to the 1950s. In that decade, the Eisenhower era, there were about 500,000 cases of measles every year.

Now, it’s not just a nuisance to have measles, a two-week disease of misery, but the results for some children can be encephalitis (inflammation of the brain, often resulting in a loss of IQ points), blindness and death. In the ’50s, there were more than 500 deaths from measles every year.

Just imagine you take your child on a fun vacation to Disneyland and — bang! — they get measles and die. Dozens of recent cases of the disease have been traced to that California theme park.

Or perhaps you have a child who is receiving chemotherapy and they happen to go to school in Seattle, one of the hotbeds of the anti-immunization movement. Your child comes into contact with another child who has measles. Because the chemo has dropped your child’s immunity, they suffer greatly or even die.

And why? All because of science fiction, the false idea that vaccines are somehow a negative.

Measles is one of the most infectious viral diseases around. It can be spread by an infected person two to four days before any rash appears and two to four days after it goes away. Direct contact — a sneeze, perhaps, or one runny-nosed kid touching another, or even touching a Kleenex — will do it.

Now, on to the pseudo-scientific evidence that the measles vaccine causes autism. It’s simply not true.

The data and resulting scientific article that first made that claim have been disproven and the scientist responsible has been discredited. That hasn’t stopped him, though. Reports are that he still makes thousands of dollars at a time lecturing on the anti-vaccination circuit. Could there be a profit motive here? Hmm ... just wondering.

The issue is autism. It’s on the rise for a couple of reasons: First, we’re more likely to recognize it now and act on it since the federal government provides some money to help schools accommodate those with autism. Back in the day, children with autism were housed in state institutions no matter how minimal their autism was. With a few exceptions, that’s not the case today.

Secondly, good data shows autism is just more prevalent. Why, you ask? I don’t know. And neither does anyone else.

But it’s not due to immunizations because in cities, counties, states and countries where immunization rates have dropped, autism continues to go up. Don’t you think if there were a connection between immunizations and autism, the autism rates would fall in those places?

Come on, folks, this is not rocket science.

We have made great advances in vaccinations. We now immunize for meningitis (don’t hear much about that anymore) and tetanus. I once saw a case of lockjaw at the infectious disease hospital in Chicago. The guy who had it was screaming, “Let me go, let me go, I want to just die!” I’ll never forget that.

We also immunize for Hepatitis B, respiratory syncytial virus (also known as RSV), pneumococcus, and so on. This is good, dynamic medicine that helps us and our children remain healthy.

Every time I take the pro-vaccination stance, I get the most hate-filled mail you can imagine. People stop me on the street and berate me for being so foolish.

To those people I say, “Bring it on.” But immunize your kids. Stay well.