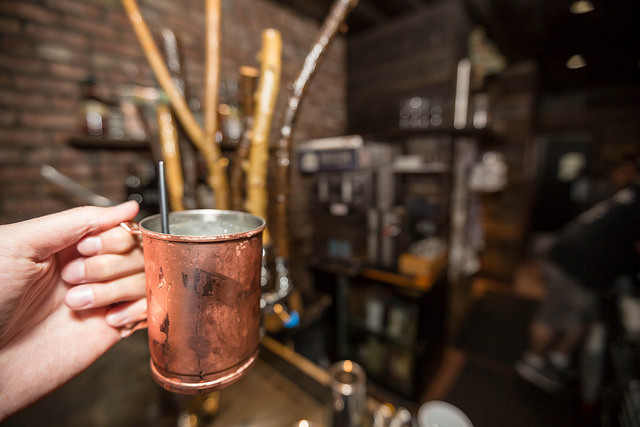 I don’t drink a lot. Never have. My dad had five sisters. When the family got together — and that was nearly every week for dinner and cards — their vice wasn’t booze, it was smoke. Cigars and cigarettes, combined with copious amounts of Coke and Fanta.

When I moved to Wisconsin, that all changed. A drink is a drink in this state. The default has been beer but more and more, it’s a mixed drink. Trendy bars that charge high-class prices for exotic drinks are springing up like weeds.

This brings me to one drink I recently tried and liked, the Moscow mule, served in a rather neat-looking copper mug. I thought I looked so cool and hip with my 70-year-old hand holding a 20-something drink.

But then I thought about the mug. Could I be getting copper poisoning? Symptoms can be mild but significant: Liver and kidney changes, along with personality and cognitive changes often misdiagnosed as psychiatric disorders, are among the symptoms of copper contamination. One theory for the fall of the Roman Empire is that they liked their drinks in copper cups.

The New York Health Department recently issued a caution that mixing copper alloys with food can violate Food and Drug Administration guidelines that say copper shouldn’t come into contact with anything too acidic in regards to food and drink.

When you have a liquid with a pH level below 6.0, you’re at risk because of the greater acidity. That means no vinegar in those copper mugs, of course, but lime juice, the mixer used in the Moscow mule, has a similar pH to vinegar. Ugh.

Now, I know you mixologists are seeing where I’m going with this monumental question that’s on everyone’s lips. And you guys already know the answer. When drinking that Moscow mule, use a copper cup that has an aluminum coating on the inside — which, by the way, has been the case in all the copper cups I’ve seen.

You can drink up with impunity as long as the inside of the cup looks like silver. If it looks like copper, get a refund for the mule and order a gin and tonic instead. They are old-fashioned yummy.

Germaphobes beware: That sponge you’re using might be harmful.

My daughter, DeeDee, isn’t a germaphobe, but the first thing she does when she comes home is attack the sponges. She either breaks out a new one or moves the one in the sink to the dishwasher to wash it, if it doesn’t feel slimy enough to throw away. She assumes something that, on the surface, makes sense to me — dishwashing the sponge will destroy bacteria that are lurking there ready to jump into your body and compromise your well-being.

Think again, germaphobes. You happen to be wrong. When it comes to making the sponge smell and look better, putting it in the dishwasher is spot on, but a microbiologist in Germany discovered a hole in the argument that this will kill germs.

He didn’t use a dishwasher on the sponge but went one step further — he microwaved it (did I mention that Germans are obsessive about kitchen cleanliness?) He showed that microwaved sponges actually had more bacteria in higher counts. Cooking the sponge turned out to create an excellent environment for bacteria to multiply like rabbits.

This is not a light subject for anyone with immune problems such as HIV/AIDS, those undergoing chemotherapy, or people on other medications such as prednisone that can interrupt the immune system. For them, fresh sponges or disposable wipes to keep things exceedingly clean are the rule of thumb.

My spin: The big issues are the food offenders we should be careful with such as chicken, ground beef, fish and pork. When you cut these on your cutting board, wash it immediately to remove bacteria before chopping those veggies.

If you’re going to maintain a clean kitchen, focus on the bad actors that lurk there. Salmonella and E. coli are silent thieves, nearly always from animal products, that cause many of the 300,000 hospitalizations and 4,000 food-related deaths each year.

Keep them at bay. And stay well.