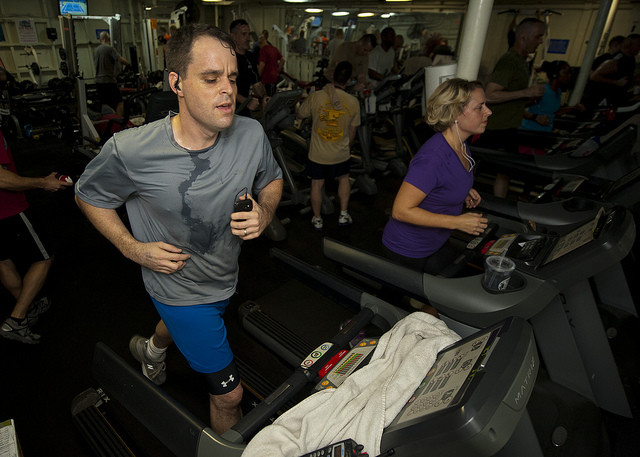 New Research Shows Smartphones Might Be Dumb Phones When Using Them While Exercising
By Dr. Zorba Paster
Share:

In the last few years, I’ve noticed that so many people are looking at their smartphone while they’re walking or jogging on the treadmill. Ankle and foot injuries have skyrocketed because people just don’t pay attention when they’re out there walking.

But, new research out of Kent State University shows that smartphones might be dumb phones when it comes to using them while you’re exercising.

Researchers put 44 college students on a treadmill and had them exercise for a half-hour. Some were just listening to music; others were actually using their phone as a phone, talking to their friends; and the final group was texting.

They wanted to see if using your handheld device affected your exercise capacity. All were compared to a control group who just went on the treadmill and did their thing without using a phone.

The music group was right on top. They exercised harder than the control group and were the happiest doing it. There must be something about listening to music that makes you feel good when you’re moving your body.

The talkers didn’t score as well. Their routine wasn’t nearly as aerobic as the music or control group’s, and they were not as satisfied when their routine was over.

And as for the texters, they were dead last. They did the least intense workout and liked it less than all the others. They were not happy campers.

My spin: If you’re going to exercise, you might want to do it right — with music and not with distraction.

While we’re on exercise, let me share a study that recently came out of Northwestern University on exercise after prostate cancer. A prostatectomy is a significant operation, a long surgery time and a long recovery time. It just racks the body. Researchers wanted to know how post-op exercise might help recovery.

So, they compared men who walked five to seven days a week — strollers and brisk walkers — to those who didn’t do anything. The strollers felt better than the couch potatoes, but the brisk walkers were in the top group, with more vitality and better physical functioning. They were all-around a star group.

My spin: Take the hint and keep moving all the time. And all the time means post-surgery, too. I think we can easily extend this to cover all recovery times from surgery. Move it or lose it is even more meaningful after you’ve had surgery. Stay well.