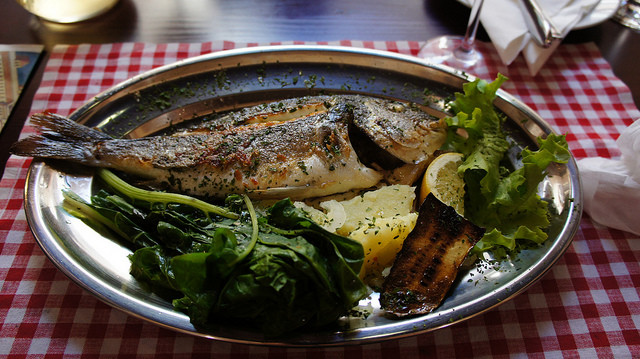 Have you been to the one of our many area farmers’ markets yet? If not, you should definitely go. The cornucopia of nature just spreads out before you as you go from one vendor to the next.

And what’s nice about this is that it makes the Mediterranean diet even easier to follow.

Newly published research shows that this king of diets not only reduces heart attacks by 30 percent and strokes by 30 percent, but it also reduces memory loss.

Imagine that, a diet that’s good for your heart, your blood vessels and your brain that also tastes great. What’s not to like? It’s the diet we should all try to emulate. Why would anyone follow the low-fat diet that so many doctors prescribe?

Full disclosure: I used to prescribe the cardboard diet, too. I’ll never forget when my wife, Penny, and I were in France on a public radio trip. We were eating a fabulous meal in a fabulous café with a fabulous view when one of the others in our group said, “I have heart disease. My doctor would never allow me to eat this way. It would kill me.” As Yoda would say, “He wrong me thinks.”

To find this out, researchers took 500 people, healthy men and women age 50 to 80 who had risk factors for stroke and heart attacks — diabetes, smokers, high blood pressure, high cholesterol and a family history of premature heart attacks — but who had never had a heart attack, stroke or memory loss. All were free of dementia. All were given a battery of psychological tests that measured IQ, memory, thinking ability, language fluency — all the things we associate with good cognitive functioning.

Now, I can be criticized here for saying that low fat is not tasty, and I’ll grant that there are many low-fat meals that are. But if you really want to see how low fat sells, just go to a restaurant. Have you noticed how low fat is given a smaller slot on the menu?

And one more thing — how many low-fat restaurants do you see and how many of them advertise: “Hey, we have low-fat food; come and get it”? Low fat doesn’t sell.

Four years later, when they measured everybody again, they found that the enriched Mediterranean diet seemed to protect people from developing memory loss and dementia. The low-fat diet people were more likely to lose brain function.

Why? Too soon to tell, but oxidative stress is bad for our brains and a diet rich in antioxidants is good for our brains. It may be that simple. Or maybe it’s the vitamins and minerals or the “yet to be discovered” micro-nutrients. Or maybe if we enjoy our food we keep our brain?

I’m not sure, but I can tell you one thing: If there were a pill that would help keep your memory going, your intelligence flourishing and your IQ higher, don’t you think you would take it? Why do you think so many people take Ginkgo Biloba, which study after study has shown to be a sham? Why do others take gobs and gobs of industrially produced capsules and tablets, often costing $25 to $50 a month, without a shred of evidence?