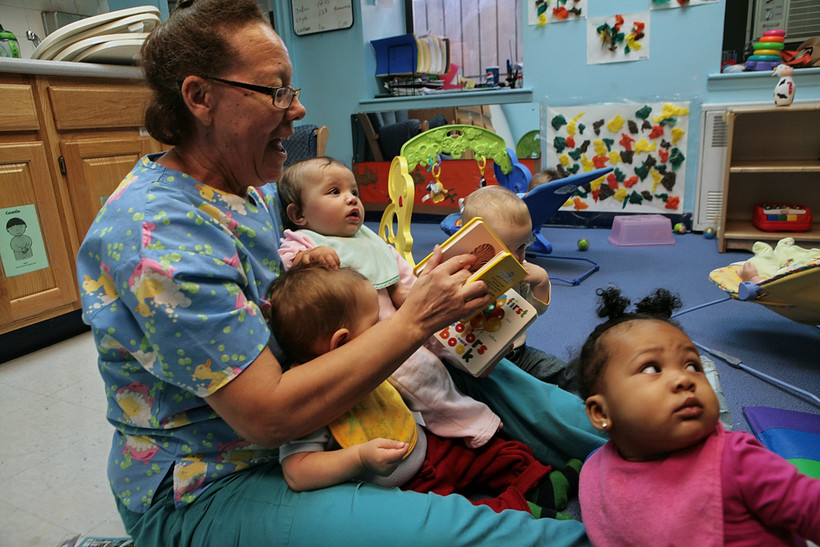 Zorba Paster: The Importance Of Talking To Your Infant

Penny and I raised four kids. It kept us busy, especially those first three years. We had the first three kids in 30 months. Busy, busy, busy.

We knew they couldn’t tell us what was going on, but we were sure their tiny growing brains were getting something out of it.

New research out of Northwestern University has shown that, yes, those little tykes are learning all the time. So let me set up how they measured it first and then tell you about this fascinating study.

The measurement they used was "looking times." This uses how long an infant stares at an object as a measure of how interesting the object is. Infant "stare times" show cognition.

The study showed they spent more time looking at the new picture of the dinosaur than they did looking at the fish, meaning the new dinosaur looked, to them, a lot like the old dinosaur. They were forming a categorization — dinosaurs look a lot different than fish.

As they were doing this, the researchers were talking to the infants in English, saying the word dinosaur. Then they switched to the German pronunciation of the word dinosaur — they continued to stare just as long. But when they switched to the Chinese word for dinosaur, the infants didn’t respond the same way as they did when the English word or the German word for dinosaur was used. They started looking around. Not staring. They appeared not to pay as much attention.

Here’s where theory plays a roll. Remember, a theory is just speculation that has some scientific merit. It’s not proof positive but just a good possibility.

It appears these little infants were linking human speech that was familiar to them — in this case, the English word dinosaur — with a visual object, the picture of the dinosaur, and connecting them together. These little babies were putting categories together with speech before many of them were able to make their first smile.

So let’s put this all together ourselves — theory and speculation along with other studies that have shown the importance of reading to your kids. And I surmise as follows:

From the get-go, from birth, and most likely from inside the womb, those little baby brains are thinking. They’re making categories and they’re processing information continuously. But they can’t tell us what they’re doing because they don’t have the tools to communicate. They’re only 3 and 4 months old.

They just started that first smile, the real smile, that first interactive smile that shows they’ve been sucking up information for weeks. They finally got it — understood that you were looking for them to smile back. Meanwhile their little brains have been humming along, night and day, making connections that they need to be smart.

My spin: This means that you as a parent, a caregiver, a grandparent need to talk, talk, talk to kids from the moment they’re born throughout the day. That human interaction, from birth forward, is the key to brain development. Sure, when you’re fixing dinner it’s OK to put your kids in front of the TV, but that’s not where they learn. It’s when you explain what you’re doing, while you’re doing it, that they absorb it. Those brains are sponges just wanting to soak up knowledge so they can learn as they grow. Stay well.