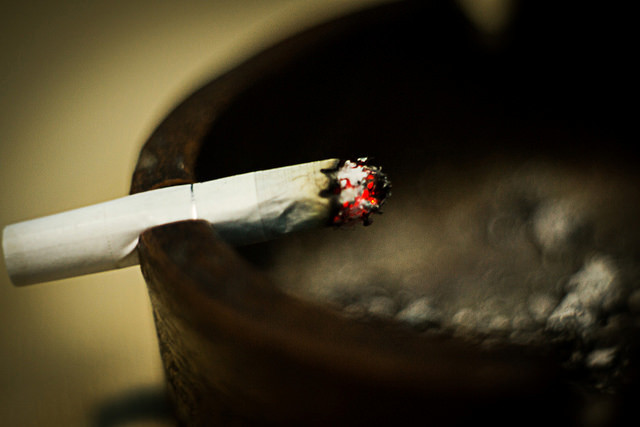 I used to be a smoker. Many of you, my loyal readers, know that. I was a dumb, stupid college student who thought smoking would make me hip and attractive to you know who.

I was recently trekking in the Himalayas with a good friend. We were hiking up 3,500 feet to see a fantastic view of peaks nearly as high as Everest. Huffing and puffing from the work it took, and the altitude, this wonderful subject of tobacco came up.

My friend said her mother had told her she would have to take up smoking or drinking to make it socially. She had chosen to huff on those butts for four years.

I went from cigarettes to an occasional pipe. Back in the '70s, pipe smoking and a daily cigar were considered safe, as long as you didn’t inhale.

Which brings me to the last stop in this personal "Tobacco Road" story. For years I would tell people who just couldn't quit, couldn't give up those one or two butts a day, that while they were still harming themselves, the risk from just a couple of daily cigarettes was probably minimal.

Well, guess what: I was wrong.

Research published in the British Medical Journal shows smoking just one cigarette a day increases your risk of having a heart attack and stroke by nearly half as much as smoking 20 cigarettes a day.

We know that smoking 20 cigarettes a day dramatically increases your risk of lung cancer. The more cigarettes you smoke, the greater the risk. But lung cancer isn’t the leading cause of premature death in smokers. It’s heart attacks and stroke — those are the killers.

This research shows that even one cigarette a day can increase that risk, by nearly half as much as if you smoked a pack a day. And this research is good. It’s a meta-analysis of many studies, a study of studies.

Isn’t it time to just quit? Of course, it is. We have good methods for helping people kick the habit, including medications that work. For some, it’s electronic cigarettes — not a favorite of mine, but looking at this data I would clearly favor e-cigs over even one regular cigarette a day.

And then there is the social aspect that I talked about — Mom said smoke or drink or you won’t be popular. If your friends smoke, you are more likely to smoke, too. Does that really make you popular?

So your way out of the smoking mess might be to do it as a team. Find a friend and kick the habit together. That will really make you "popular."