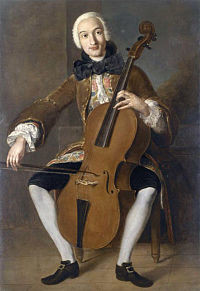 One day in the 1770s the Prince of Asturias was eager to hear the latest quintet by Luigi Boccherini, and with a simple lapse of tact the composer turned the honor into a catastrophe.

The story might well have been exaggerated for the sake of good gossip, but the confrontation between the composer and the prince was clearly tense enough to leave a lasting impression.

According to the story, the prince began to play the first violin part of the quintet and found it extremely monotonous, the notes do si,do si alternating on and on for half a page. The prince launched into his part with vigor and, not noticing the general harmonic effect of the work, got impatient and began to exaggerate the repetition of his part, then lost his patience completely, jumped to his feet and voiced his annoyance. “Any novice could write stuff like this–do si, do si!”

Boccherini remained calm and deferential. “Sire, will Your Highness be so gracious as to observe the modulations that the second violin and the viola are expressing, and the pizzicato to be heard in the part for the violoncello while the first violin repeats itself? The sameness of the first violin ceases to be monotonous as soon as the other instruments enter and participate in the dialogue.”

But the prince was not to be pacified. “Do si, do si! And it goes on that way for half an hour. Some delicious dialogue! It’s the music of a novice–and a bad novice at that!”

Boccherini couldn’t resist a comeback. “Sire, before making such a judgment it is necessary to understand music.”

That was enough for the prince. From then on the palace was off limits to Luigi Boccherini. It was forbidden to mention his name at court, and he soon became a nonentity there.