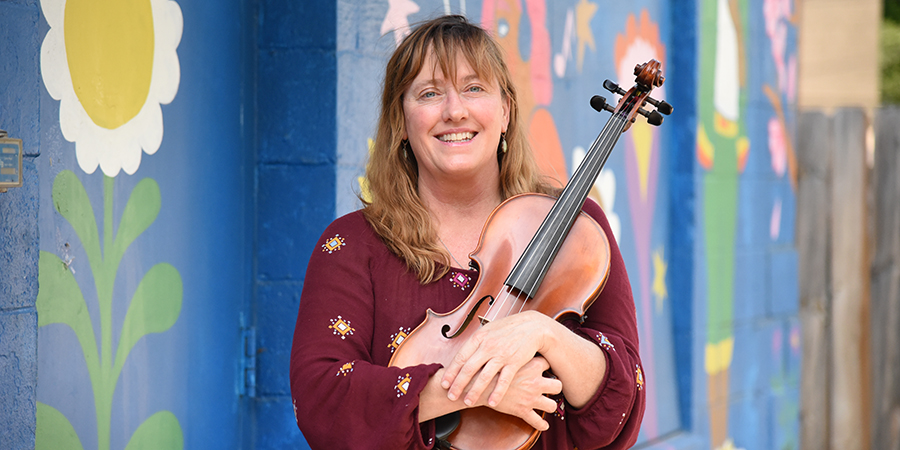 We are very excited to welcome Síle Shigley as the permanent host of the station’s long-running Sunday night folk music show “Simply Folk.” Shigley brings an abundance of experience to her new role. She’s performed in the Celtic a cappella vocal quartet Navan for over fifteen years, playing across the United States, and she’s steeped in the musical traditions of Ireland, Scotland, Wales, Brittany, Cornwall and the Isle of Man. She has worked at WPR since 2000, supporting “Simply Folk” as its librarian. Furthermore, Shigley has been fill-in host on the show since 2013.

Shigley venerates the show’s history, and plans to continue playing music with deep roots in traditional folk, while also showcasing new folk recordings. Some of the artists she’s excited for listeners to hear include the Avett Brothers, Cahalen Morrison and Eli West, and Scottish folksinger Julie Fowlis. She loves how folk music evolves but stays true to its core, while encompassing a huge variety of styles. “One of the wonderful things about this genre is that it doesn’t have to be limited by industry standards,” said Shigley. “On ‘Simply Folk’ we might play a nine-minute ballad, to spoken word, to something recorded on a back porch out in the country somewhere. Folk music is so much more expansive than a three-minute song. You need that long to tell a story sometimes,” she added.

“If you listen to ‘Simply Folk,’ you know the warm, welcoming voice Síle brings to the show, plus her deep knowledge of the music,” said Peter Bryant, WPR’s Director of News & Music. “We’re delighted that Síle has stepped up to the regular weekly host role. Our ‘Simply Folk’ audience is a loyal community, and so many people already know and love Síle’s sensitive music selections.”

Shigley’s first show in her new permanent host role is July 11. Listeners will continue to hear Jeff Durkee as the fill-in host.

WPR’s “Simply Folk” debuted in 1979, to play folk music from around the world and to celebrate music made and played in Wisconsin. The show’s live recording archives include folk legends Pete Seeger, Malvina Reynolds, Elizabeth Cotton and many more, as well as contemporary favorites such as Greg Brown, Billy Bragg and Dar Williams. The show airs Sunday nights from 5 to 8 p.m. on WPR’s News & Music, The Ideas Network and wpr.org live streams on the web, the WPR app and on smart speakers.