Young Golfers Say They're Excited About Growing Interest Among Their Peers
By Megan Hart
Share:

It was perfect weather at the Brown County Golf Club Monday, where about 70 kids participated in a youth tournament, one of more than 100 the Wisconsin PGA will host this summer.

Bryson Mercier finished 2-under-par to win his age group. The Upper Peninsula native said he was happy with his score — despite "hacking it in" the last three holes. The sport has taught him how to bounce back when things don’t go your way, he said.

Wisconsin PGA is hoping to have around 8,000 entries at youth tournaments this year. That’s about 1,000 more than last summer, which was also saw record numbers. Youth golfers Jolie Guyette, Aliisa Helminen and Ava Bloch read their scores for an official after golfing in the tournament Monday, June 14, 2021, at the Brown County Golf Course in Oneida, Wis. Angela Major/WPR

There are events for every skill level, said Andy Landenberger, director of junior golf for Wisconsin PGA.

The pace of play was fast on Tuesday, with 12- to 18-year-olds playing in threesomes. Players travel from across the state to attend WPGA tournaments. Landenberger had to assure one family they’d catch the final ferry of the day back to their home on Washington Island on Monday.

In contrast, it wasn’t a long trip for Jolie Guyette, who shot the lowest score — a 74 on the par 72 course — among girls in her age group. She only picked up the sport as a freshman after offering to learn so her dad would have someone to golf with.

She’s come a long way in almost four years, having finished third in this spring’s WIAA individual tournament. Now she plays at the Brown County Golf Course almost every day, she said. The sport has taught her patience, and she’s happy more kids are getting into it, she said. 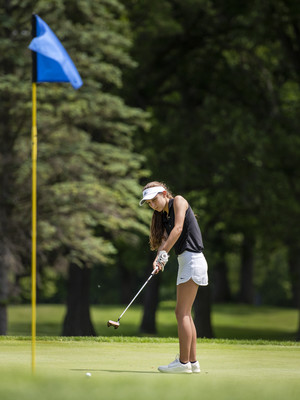 "It’s always good to compete against great players and see how you stack up, so the more people that get into it, the better," she said.

Waiting lists are already full for almost 30 tournaments this summer, Landenberger said. He attributes some growth to the coronavirus pandemic. Golf became a popular alternative when other youth sports were canceled. It was a lifeline during the pandemic for high school senior Brendan Lemery from Appleton, who finished fourth in Monday’s tournament.

"It was really hard the first couple of months, and then when we finally got to golf again, it didn’t feel as bad," he said.

And it’s not only kids who’ve hit the links this past year. Courses across the state have been busy, Landenberger said.

"Now if you didn’t make a tee time ahead of time, you’re not going to get out. Especially on a nice day, they’re busy from sunup to sundown," Landenberger said.

It also doesn’t hurt that Wisconsin is hosting the Ryder Cup this year. Big events like that draw attention to the sport, he said.