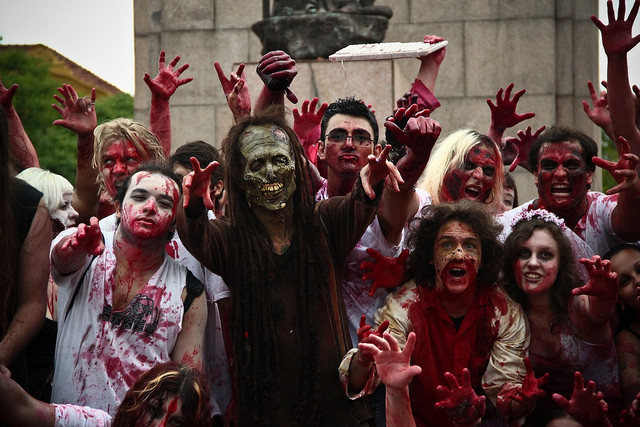 No matter where you go these days, it’s hard to escape the flood of stories about the zombie apocalypse in the media.

While popular TV shows like "The Walking Dead" and movies like "Dawn Of The Dead" and "Zombieland" are at the focal point of this apparently undying cultural phenomenon, zombie-mania has even spread to the U.S. Centers of Disease Control and Prevention, which is getting in on the fun with a page on its site devoted to "zombie preparedness," providing the public an "entertaining way to introduce emergency preparedness."

And the zombie trend shows no signs of slowing down. But why?

Max Brooks knows a thing or two about the apocalypse.  He’s the author of a handful of books, including "World War Z," which was recently adapted into major motion picture earlier this year starring Brad Pitt.

Brooks said when people start to become uncertain about the world around them, apocalyptic fiction tends to thrive.

“I think we instinctively want to explore the apocalypse when we see what we think is the system breaking down,” Brooks said.  “And I think the 1970s was exactly like the time we’re living in now. People had a sense that things weren’t working.”

However, Brooks noted that straight-up apocalypse stories aren’t as appealing.  And that’s where zombies come in.

“It’s human nature to look ahead, but it’s also human nature to turn away if it’s a little too real,” Brooks said.  “So, you put a little science fiction on there, you make the catalyst fake … say, zombies … and then you can watch the apocalypse.”

As a metaphor, zombies can work on many levels.

“I think they’re a Rorschach test for whatever scares us,” Brooks said.  “They’re also a great metaphor for major global catastrophes, which we’ve been battered with for the last decade.”

So much so that the government and the CDC is using fictional zombies to prepare us for real-life disasters.

“This is a great way to get young people thinking about what to do in a quarantine,” Brooks said.  “But you don’t say an actual quarantine.  You say zombies.  But if these young people are going on the website of the CDC to prepare a zombie kit, they’re ready for a quarantine.”

In addition to preparing us for times of disaster, Brooks also thinks zombies can also give us a deeper appreciation for the services that we take for granted each day.