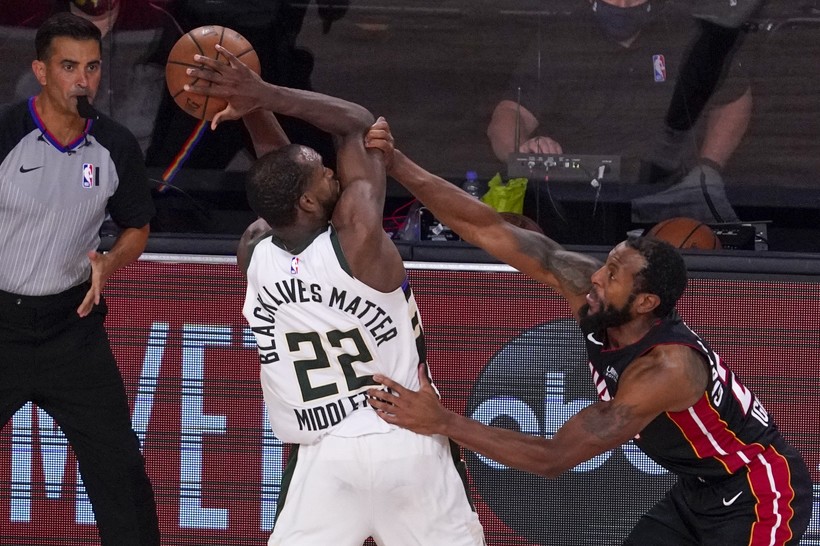 Without Antetokounmpo, Bucks Come Up Big In OT To Extend Series Against Heat

The Milwaukee Bucks extended their season with a gutsy 118-115 win Sunday over the Miami Heat. The Heat now lead the Bucks 3-1 in the Eastern Conference semifinals.

The Bucks, led by Khris Middleton with 36 points, managed to outscore the Heat without the help of MVP finalist Giannis Antetokounmpo, who reinjured his ankle early in the second quarter.

"We know he was laying down the line out there for us. His ankle was in bad shape," Middleton said. "We had to have his back tonight -- hopefully we’ll have him back again for the next game, but if not, we still have to play as hard as we can. We’ll have to fight every night to keep on playing."

After the game, head coach Mike Budenholzer said Middleton stepped up with the Bucks needed it.

"I think he sees the court and reads it, and he plays unselfishly," Budenholzer said.

Antetokounmpo, who had 19 points in 11 minutes to open the game, will get treatment tonight, but his future in the series is uncertain, Budenholzer said.

The Heat looked like they could run away late, but the Bucks went on a 12-0 run in the fourth quarter to get back in the game.

With less than a minute left, Milwaukee-native Tyler Herro hit a three for the Heat, putting Miami up one. The Bucks’ Donte DiVincenzo was then fouled at the other end of the court. He missed one free throw and made one, sending the game to overtime.

In the extra period, Herro sunk two more from behind the arc, but it wasn’t enough. The Bucks outscored the Heat 11-8 in overtime. In those five minutes, Milwaukee’s defense looked as strong as it has all playoffs, despite missing Antetokounmpo, who was named Defensive Player of the Year this season.

The Heat have been led this series by former Marquette Golden Eagles Jimmy Butler and Jae Crowder. Butler had a postseason career high of 40 points in Game 1, but the Bucks managed to hold him to 17 on Sunday.

Miami was the only team to beat Milwaukee twice in the regular season, but few predicted the Heat would sweep the Bucks. Milwaukee hasn’t lost four games in a row all season.

Game 5 is set for Tuesday at 5:30 p.m. The winner of this series will face the Boston Celtics or the Toronto Raptors in the Eastern Conference finals. No NBA team has ever come back from a 3-0 series deficit.