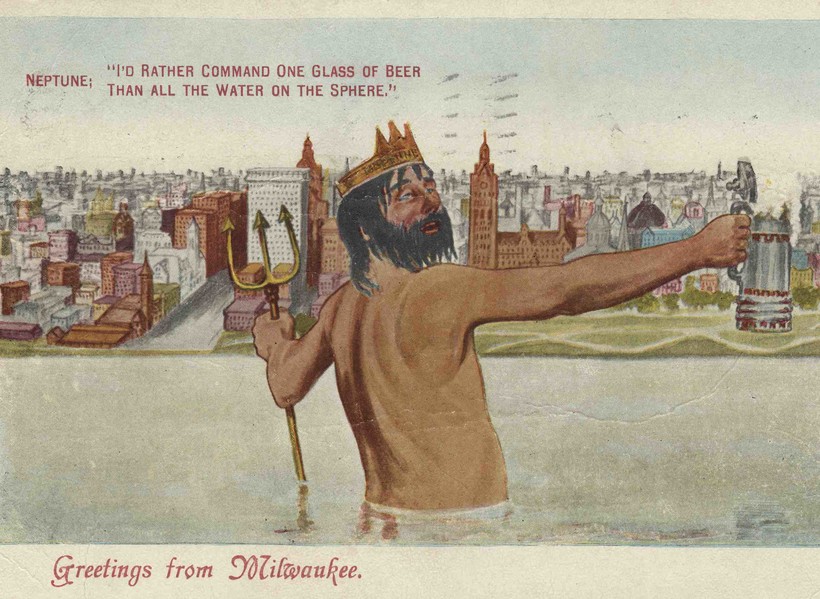 A 1914 postcard portrays Neptune, the Roman god of the seas, enjoying a beer in Lake Michigan.

WisContext: World War I Turned Milwaukee's Germans And Their Beer Into Targets

Wisconsin may be known as the Dairy State, but its status as a bastion of beer is just as legendary.

When the United States entered World War I, though, the German roots of the state’s brewing industry centered in Milwaukee fueled the efforts of prohibitionists looking to ban the production and consumption of alcoholic beverages.

Jana Weiss, an associate professor of North American history at the University of Münster in North Rhine-Westphalia, Germany, discussed the temperance movement, the German-American roots of Wisconsin’s brewing industry and how they collided during the Great War in an Oct. 28, 2017 presentation at the World War 100 conference, recorded for Wisconsin Public Television’s "University Place."

“As German immigrants flocked into the United States, especially during the second half of the 19th century, they transformed the American brewing industry and triggered what I call the lager beer revolution,” Weiss said.

Wisconsin emerged as one of the biggest brewing centers in the nation, and that industry would make the state’s biggest city famous. "Milwaukee became the state's beer capital with the rise of the city's beer barons, such as Pabst, Blatz and Miller," Weiss added. "All were of German descent."

Activists in Wisconsin’s temperance movement had long asserted that the alcohol industry begat crime, poverty, ill health and all-around immorality, but gained more widespread support as the U.S. entered World War I by appealing to patriotism. Prohibitionists argued that brewing hurt the war effort by wasting food, coal and gasoline that could have been diverted to the Western Front in France, and sought to link German-American brewery owners to Kaiser Wilhelm II through pamphlets distributed in Wisconsin. An influx of German immigrants in the 19th century set off a "lager beer revolution." Wisconsin Historical Society

Much of the association between beer and German identity came from the breweries themselves. Over decades preceding the war, their marketing efforts had highlighted their founders’ connections to beer-drinking Germany. The beer garden culture of Gemütlichkeit, a custom of sociability and family friendliness, was highlighted as a positive alternative to saloons that were seen as socially corrosive and hosts of crime and corruption.

The German-American-led brewing industry in Milwaukee and cities in other states struggled to counteract the narrative that its beer barons valued profit over the well-being of the nation, and they increasingly lost ground trying to rebut arguments the temperance movement made on moral and religious grounds. Brewers attempted to argue that prohibition of their product damaged the war effort by dividing the nation and diverting money to politicking, but their assertions were ultimately ineffective.

Just two months after Armistice Day, Congress ratified the 18th Amendment on Jan. 16, 1919. Prohibition banned the sale of alcohol nationwide and ended, for a time, Wisconsin’s prolific beer industry. The production lines of Milwaukee’s brewing titans closed or were repurposed until 1933 when Prohibition ended and brewing could resume.

Eighty-some years later, and a century after World War I, Wisconsin’s largest city has seen a resurgence of some of the cultural touchstones of the beer industry’s pre-Prohibition era.

"The current craft beer movement has not only sparked a new interest in old-style beers, but also in German-style beer gardens," Weiss said. "For example, a couple of years back, the Estabrook Beer Garden opened in Milwaukee, and on its home page refers to the German Gemütlichkeit. So, it seems that, after all, German Gemütlichkeit prevails." Milwaukee's drinking culture had a conflicted and complex relationship with morality, patriotism, and the temperance movement. Wisconsin Historical Society

World War I Turned Milwaukee's Germans And Their Beer Into Targets was originally published on WisContext which produced the article in a partnership between Wisconsin Public Radio, Wisconsin Public Television and Cooperative Extension.