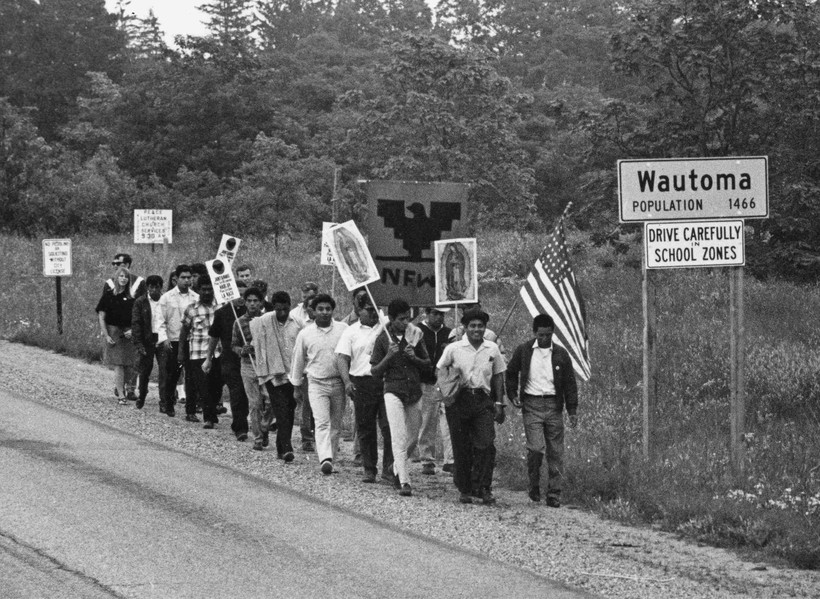 In 1966, members and supporters of Obreros Unidos marched from Wautoma and walking towards Madison along Highway 21 to petition lawmakers for better working conditions for migrant workers from farms and the food industry.

WisContext: A Mid-Century Turning Point For Migrant Farmworkers In Wisconsin

Migrant workers played a key role in making Wisconsin a modern agricultural powerhouse. Seasonal workers who traveled from Mexico, and Texas-born people of Mexican descent, known as Tejanos, became a crucial part of Wisconsin's agricultural workforce during and after World War II, setting the stage for a dairy industry that relies heavily on immigrants to this day.

As they found work in Wisconsin and elsewhere around the United States, Mexican-American and Mexican migrant workers often found that white farmers and food processors wanted their labor but often did not regard them as fellow citizens or fellow human beings. These attitudes have influenced the politics of immigration throughout the nation's history, especially in the early 20th century when Wisconsin experienced its first significant wave of Mexican immigration.

Sergio M. González, a Marquette University professor of history and language who earned his Ph.D. at the University of Wisconsin-Madison, has conducted detailed research into the history of Mexican-Americans in Wisconsin, with an eye toward how this immigrant group has confronted labor abuses and racialized politics. González wrote the 2017 book Mexicans in Wisconsin, which explores specific periods and political and cultural facets of Wisconsin's Mexican-American communities, from the arrival of "Los Primeros" in the 1920s to a broad wave of undocumented immigrants in the 1970s and '80s.

In an Oct. 17, 2017 talk at the Wisconsin Historical Museum in Madison, González discussed a period running from the outbreak of World War II to the late 1960s that shaped the role of Wisconsin's migrant workers and year-round Latin American residents in profound ways. The war ratcheted up pressure on Wisconsin agriculture to produce more food, and many of the migrant workers who stepped in found themselves facing abusive employers and substandard living conditions. In the town of Plymouth in 1948, a Mexican woman and her six children stand on the porch of the multiple-family housing provided to them by the pea cannery for which their husband and father works. Wisconsin Historical Society

González began his talk, recorded for Wisconsin Public Television's "University Place," with a story about a group of migrant-worker families who tried to go to a county-operated swimming pool in Waupun in 1949. A custodian at the pool, Seymour Patrick, barred the families, complaining that migrant workers didn't speak English and saying that white parents didn't want their children to play with Mexicans or Tejanos. The Fond du Lac County government and the League of Women Voters of Waupun pushed back, starting a local movement to address racial divides within the community.

Despite this and similar efforts, some at the state-government level, real change came slowly, González said. State commissions on migrant labor conducted studies that managed to shed light on the challenges Latin-American workers and families in Wisconsin faced, but they often lacked the authority to actually make or enforce policies. Frustration with such efforts prompted workers to take more action on their own, which included forming unions and conducting marches to the state Capitol. These movements drew inspiration from major immigrant-labor leaders in California like Dolores Huerta and Cesar Chavez, and from the Chicano Movement of the 1960s. A family from Texas temporarily settles in Waushara County in 1967. Wisconsin Historical Society Workers organized by Obreros Unidos gather at a cucumber receiving station in Portage in 1967 after striking. Wisconsin Historical Society A Mid-Century Turning Point For Migrant Farmworkers In Wisconsin was originally published on WisContext which produced the article in a partnership between Wisconsin Public Radio, Wisconsin Public Television and Cooperative Extension.