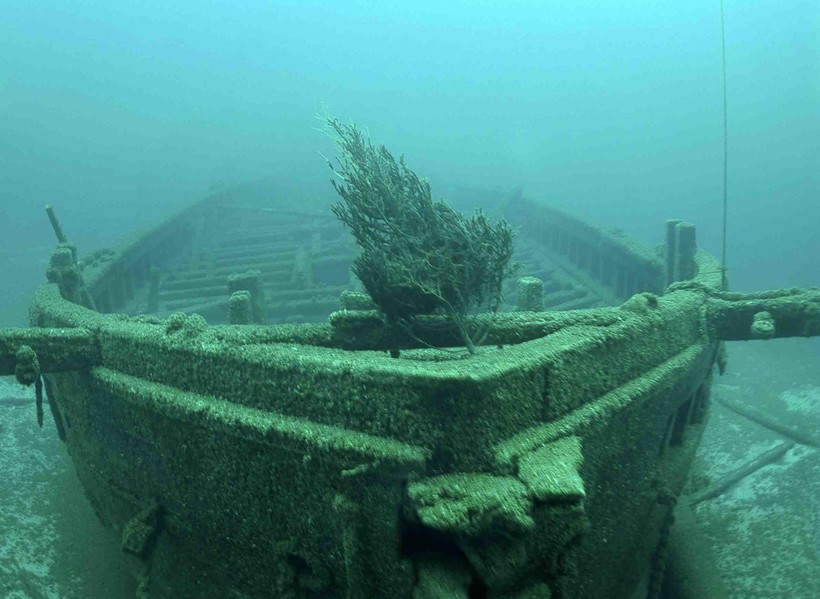 A Christmas tree adorns the bow of the Rouse Simmons shipwreck in a 2014 photo. Local divers place evergreen trees on the ship every year to mark its sinking.

Decorating Christmas trees often evokes sentimental memories of years gone by. The business behind this holiday custom has deep roots in Wisconsin’s history. One story that stands out is an early 20th century shipwreck that serves as a reminder of the often-dangerous conditions faced by those who have plied the Great Lakes' waters.

Hoping to cash in on the seasonal tradition, Capt. Herman Schuenemann purchased a 42-year-old lumber schooner named Rouse Simmons in 1910 to ship Christmas trees from Thompson, Mich., to Chicago. By this point in time, most of his competitors had discontinued the practice of sailing boats on Lake Michigan and were instead transporting trees to Chicago by train and selling them in the rail yards. But Schuemenann was banking on people purchasing a tree from the deck of the boat, which was decorated with lights and garlands and anchored in the Chicago River, as he had with other ships.

By November 1912, the Rouse Simmons was in rough condition and no longer watertight, yet Schuenemann chose not to have the ship caulked before making the once-a-year voyage. On its way south after picking up trees in the Upper Peninsula, the vessel was spotted by the life-saving service at Kewaunee, flying an American flag upside down from its rigging as a sign of distress. The Kewaunee station was only equipped with a rowboat and couldn't catch up with the schooner in gale-force winds, so its staff phoned the life-saving service at Two Rivers. This station had a powered lifeboat, which headed out in search of the ship. But the rescuers were not able to find it.

The Rouse Simmons, fully loaded with Christmas trees, sank on Nov. 23, 1912, taking down 16 men, including Schuenemann. An undated illustration depicts the Rouse Simmons near a shoreline. Wisconsin Historical Society

Tamera Thomsen, an archeologist with the Maritime Preservation Program at the Wisconsin Historical Society, shared the account of the shipwreck at a Jan. 19, 2016 presentation, recorded for Wisconsin Public Television's "University Place." She also shared findings from efforts to document the condition of the Rouse Simmons and to determine the cause of its sinking.

Thomsen theorized that the ship took on water, which ran forward to its bow. The Rouse Simmons then hit a wave with the bow low in the water, catapulting the rigging forward. The wreckage indicates that the crew deployed the anchor, possibly to stabilize the boat in the wind so they could launch lifeboats, but the anchor came loose and cracked off the bowsprit. A maritime archeologist diving at the Rouse Simmons shipwreck in 2005 shines a light at its windlass, a mechanism used to control the chains used with anchors. Wisconsin Historical Society

John Janzen, an underwater videographer and one of the many scuba divers who have explored the Rouse Simmons, continued the presentation with a discussion of the diving equipment he uses and the challenges he faced when exploring shipwrecks. Explaining that air bubbles interfere with recording of underwater footage, he uses a state of the art closed circuit rebreather which, unlike traditional gear, allows exhaled gases to be recycled back into use.

Janzen shared footage of his 2015 dive through 165 feet of water into the wreck. He pointed out idiosyncrasies in how the anchor was deployed and other clues to what may have occurred onboard as the leaky boat sank. He also highlighted the remains of the Christmas trees still visible on the vessel.

"It's a little bit hard to see the trees," Janzen said. "You just see them as little sticks. Just the trunks are remaining and a few of the branches." Final Voyage Of The Christmas Tree Ship was originally published on WisContext which produced the article in a partnership between Wisconsin Public Radio, Wisconsin Public Television and Cooperative Extension.