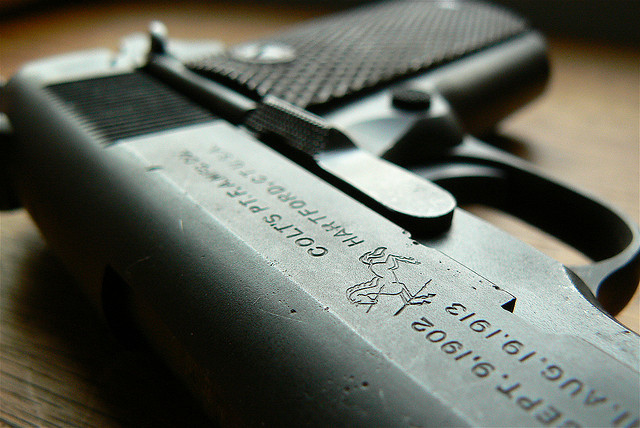 Firearms are the most frequently used means of suicide in Wisconsin, according to a new state report. Photo: Auraelius (CC-BY-NC-SA).

'Burden Of Suicide In Wisconsin' Report Finds 700 People Kill Themselves In State Each Year
By Rich Kremer
Share:

A new report shows Wisconsin’s suicide rate has remained steady over the past 13 years — something health officials say is not a good thing.

The Burden of Suicide in Wisconsin report gathered data between 2007 and 2011, and is the second such report for decision makers crafting health policies. The report showed that on average, more than 700 people commit suicide in Wisconsin each year, a number that hasn’t changed since data collection began in 2001.

“It’s still too high, I guess, is the bottom line,” said Chuck Warzecha, the deputy administrator of the state’s Division of Public Health. “It was too high back then and it continues to be too high.”

Some key findings from the report show that among the population, white and Native American men between 45 and 54 years old were more likely than others to kill themselves. Education also played a role, with higher suicide rates among people who didn’t graduate from high school. In terms of geography, counties in the northern and western region saw the highest suicide rates in the state.

Warzecha said the question for health officials is, “why?”

Warzecha said the hope is that state and local decision makers will use the data from the Burden of Suicide Report to craft tailored social and mental health programs and ultimately drive down the state’s suicide rate.