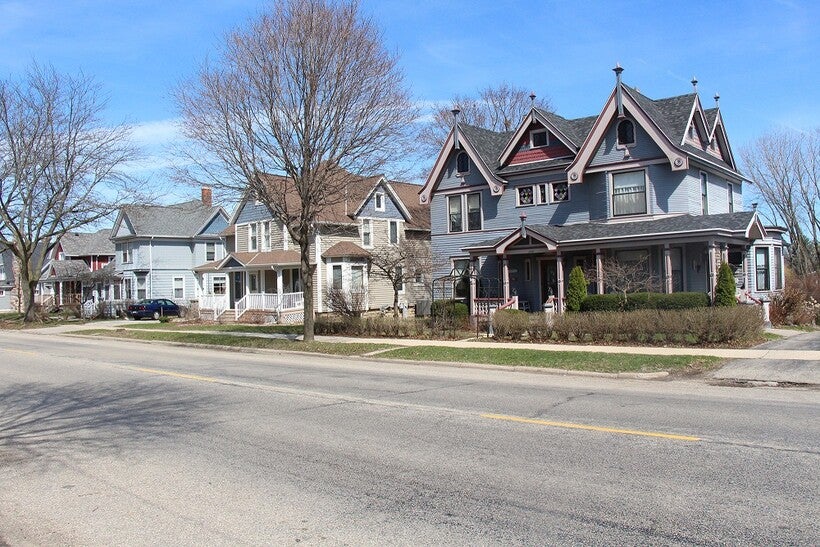 Eight sites, including a church and monastery and a Frank Lloyd Wright-inspired home, have recently been added to Wisconsin's Register of Historic Places.

Jim Draeger, an architectural historian and the state historic preservation officer at the Wisconsin Historical Society, said these locations are part of a growing list of sites that contribute to understanding the state's history.

Being registered as a historic site doesn't require any type of physical preservation of the building, Draeger said, noting that property owners will oftentimes nominate them for registration because they recognize their importance.

The State Register was established in 1989 and parallels the National Register program, which began in 1966. Apart from a few locations, the registers feature the same properties.

The properties and neighborhoods listed below were added to the register on Nov. 30, 2018, bringing the total number of listings to about 3,000, which comprise about 30,000 buildings, sites, structures and objects. A collection of homes in Manitowoc featuring homes in the style of Tudor revival, French provincial and Colonial revival. Photo courtesy of the Wisconsin Historical Society

Located in Manitowoc, this neighborhood showcases the city planning trend in the 1910s to 1920s of using boulevards, in part to accommodate larger vehicles and also as a way to attract people to the neighborhood surrounding it.

"They end up being a really neat collection of buildings," Draeger said of this neighborhood.

Homes in the district reflect styles of Tudor Revival, French Provincial and Colonial Revival, and the neighborhood reflects how architectural tastes evolved over the decades.

The Madison Vocational School building was one of the newest additions to the State Register of Historical Places. Photo courtesy of the Wisconsin Historical Society

In 1911, Wisconsin became the first state in the country to establish a vocational technical and adult training system.

Vocational schools were established to train youth who hadn't finished high school as a way to beef up the workforce to fill early 20th century jobs.

In 1921, the Madison Vocational School was built to provide those educational opportunities for the state's young adults.

According to a press release from the state Historical Society, the building has three distinct sections reflecting its three-stage development.

The institution housed in the building changed its name to the Madison Area Technical College in 1967. The technical school was renamed Madison College in 2009.

But according to the Wisconsin State Journal, Madison College plans to leave the downtown building in June 2019. A hotel will be opened in its place. St. Mary of the Angels Church and Monastery. Photo courtesy of the Wisconsin Historical Society

St. Mary of the Angels Church and Monastery

Referring to Green Bay as a "city of churches" that have "spectacular church architecture," Draeger pointed to St. Mary of the Angels Church and Monastery as one of the most stunning.

Designed by architect William E. Reynolds, the church and monastery were completed in 1903 through a partnership between the parish of St. Mary of the Angels and the Polish Franciscan Fathers.

"It's a cut-stone church, so it's very grand and a very expensive church for its time," Draeger said.

The Wisconsin Historical Society notes the pointed-arch windows, dormers, coves and entrances are reflective of the Gothic Revival style of the building.

Draeger noted that in the early 20th century, many immigrant groups wanted their own churches, and this is a case of the Polish immigrants fundraising in order to establish a church separate from the Germans. Also serving as a hotel, this building was designed by architect Armand D. Kahn and has undergone numerous renovations since the mid-1900s.

A sought-after place to live in Lake Mills, this historic district reflects popular trends in architecture up until the 1920s.

This neighborhood features homes in the style of Greek Revival, Italianate, Queen Anne and Neoclassical Revival. Forty commercial buildings in this listing span the century from 1848 to 1953. The Bernard and Fern Schwartz House. Photo courtesy of the Wisconsin Historical Society

The Bernard and Fern Schwartz House

Designed by architect Frank Lloyd Wright, this home in Two Rivers is an example of a pre-World War II home built in a Usonian style.

An example of Wright's Usonian designs, the home features flat roofs with overhanging eaves, a carport and board and batten walls.

Setting this home apart from other one-story homes built in a similar style, the Bernard and Fern Schwartz House was two-stories. This home is also the premier example of in-floor heating that updates the steam method to hot water.

This home was built from plans that Wright had submitted to Life Magazine in 1938. In Lake Mills, this collection of 11 homes feature architecture in the styles of Italianate, Second Empire, Queen Anne and Craftsman.

At least one of the homes was designed by a local architect, John Hunzicker. The homes were built for the community's founding members and other influential people.