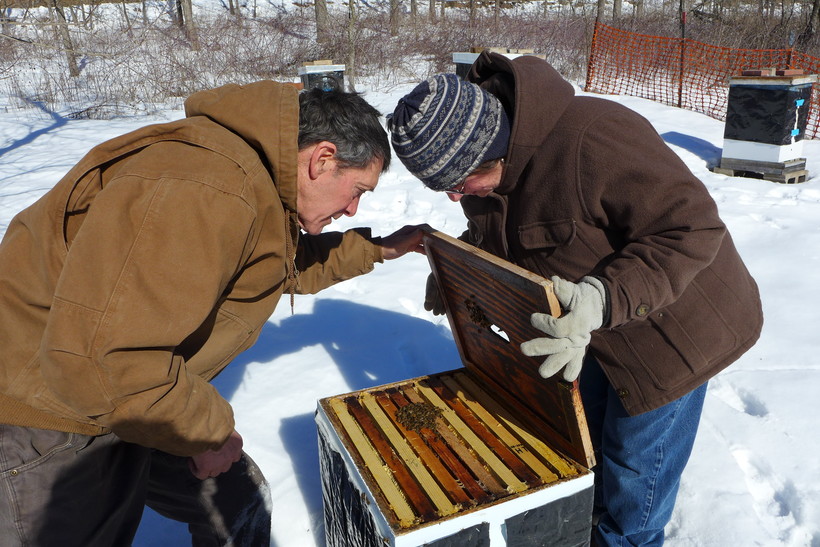 Farmer and beekeeper Harriet Behar and her husband Aaron Brin check on the bees at Behar’s Crawford County farm.

Critics Say Proposal Should Do More To Target Pesticides Harmful To Bees
By Bridgit Bowden
Share:

​Along the country road that leads to Harriet Behar’s farm in Crawford County, there are road signs that read "Native Prairie! No Mowing!" It's Behar's way of making sure there are lots of places for her bees to forage for nectar and pollen.

Behar has had her farm since 1981. She has about 24 hives and plants her fields with crops like clover that she knows will make the bees happy. Lately, however, she says beekeeping has gotten harder.

"The past 10 years, we've definitely seen a massive decline in the vigor and vitality of the bees, even though we keep trying to keep them at home by growing food for them here so they don't go off to the neighbor's corn and soybeans," said Behar.

Wisconsin is indeed becoming a hard place to be a bee. More than 60 percent of honeybee colonies died off just last year, one of the worst rates in the country. That’s why last month, the Department of Agriculture, Trade and Consumer Protection released a plan to help pollinators. The Pollinator Protection Plan recommends things like increasing roadside plantings and bee-friendly home gardens.

However, some people don’t think the state’s plan is enough. For example, it doesn't set targets for decreasing the use of a controversial class of agricultural pesticides called neonicotinoids, or neonics. These chemicals have been shown to have serious effects on pollinators.

Groves said that when neonics were introduced in the 1990s, they became popular because they were less harmful to humans and mammals than older, more toxic pesticides. However, he said there were unintended effects on pollinators.

"It's becoming pretty evident, at least through peer-reviewed science, that there are some impacts of these pesticides that originally weren't known," said Groves.

Neonic usage has grown drastically in the past 15 years. According to a 2012 estimate, the chemicals were used used in virtually all corn seed and 30 percent of soybean seed. But with concern growing over their effect on pollinators, the Environmental Protection Agency has suspended approving any new neonics and is re-evaluating the ones that are currently on the market.

Use of imidacloprid, a synthetic insecticide, has increased dramatically since it was introduced in the United States in the mid-1990s, according to the U.S. Geological Survey’s Pesticide National Synthesis Project. Studies have tied neonicotinoids such as imidacloprid to bee die-offs and damage to bee populations, but the industry says these insecticides are safe when used as directed. In January, the U.S. Environmental Protection Agency found that imidacloprid is "a threat to some pollinators" when used in cotton and citrus. Imidacloprid was the first neonic developed and is currently the most widely used insecticide in the world, according to the University of California’s Retail Nursery & Garden Center Integrated Pest Management newsletter. (Note: These maps are based primarily on surveyed data.) Credit: Haley Henschel, Wisconsin Center for Investigative Journalism

Restricting these chemicals, however, may not be enough. Claudio Gratton, a UW-Madison entomology professor who helped develop the state’s plan, said pesticides probably aren’t the only factor causing bee decline. Disease, habitat loss, low food availability and "other stresses" are also taking a toll, he said.

David Flakne, a Syngenta representative, is one of the stakeholders who also contributed to the pollinator plan. In an email to the Wisconsin Center for Investigative Journalism, he said neonics are safe when used as directed.

"Scientific evidence clearly shows that bees and other pollinators can coexist safely with modern agricultural technology, such as neonic insecticides, when product labels are followed," he wrote.

Behar, for her part, says she’s frustrated that its voluntary to follow the state’s proposal. She also dislikes that the plan doesn’t call for restrictions on neonics.

"It didn't have any mandates or pilot programs to really turn the tide," she said. "It was more, 'Wouldn't it be nice to just do a little bit more here, but let's not push anybody.' And I think we need to be pushed."

Editor's Note: This story was produced in partnership with the Wisconsin Center for Investigative Journalism. For more, visit their website.