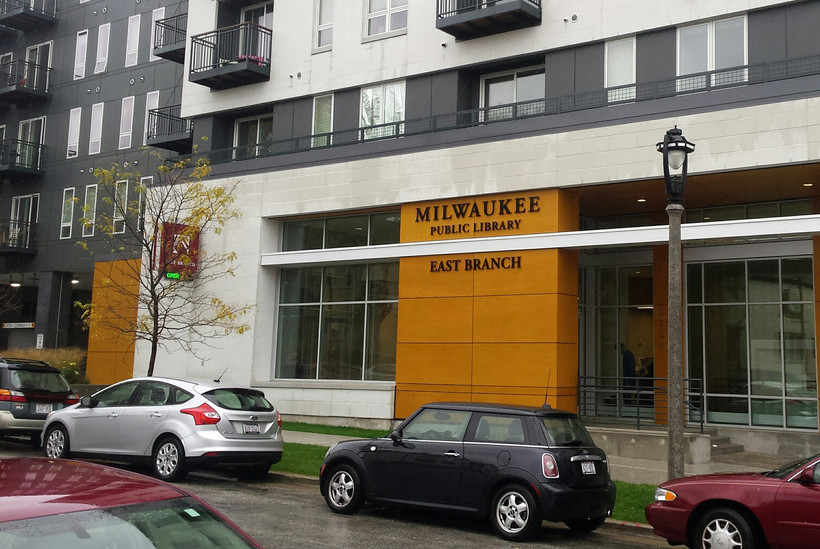 The East Branch library in Milwaukee is part of a mixed-use development that includes apartments and retail space.

Through Technology And Redesigned Spaces, Institutions Strive To Keep Up Their Popularity
By Chuck Quirmbach
Share:

Inside a branch of the Milwaukee Public Library on the city's upper east side, Rachel Collins is giving a demonstration of how to use one of the facility's kiosks — one that dispenses neither books nor periodicals, but laptop computers.

The branch manager lets a reader scan her library card, and soon after, the machine ejects one of the computers. "(They're) a little heavier than you would think," she said.

According to Collins, patrons can use the computer for two hours at no charge. In addition to the laptop kiosk, the East Branch — rebuilt less than a year ago — offers ways to check out e-books on a smartphone. It also houses more flexible meeting spaces, all within a building that also includes 99 apartments and retail space.

It's just one example of how Wisconsin's more-than 400 public libraries or branch libraries are striving to remain relevant and popular. As more of the world goes digital, the institutions are looking at ways to keep up with the times and meet the evolving needs of their patrons.

Wayne Wiegand, a library and information studies professor at Florida State University, said that libraries have plenty of critics these days.

"'It's all on the Internet,' hype many evangelists of information technology. 'Libraries are dinosaurs' grouse officials looking to cut budgets," said Wiegand, channeling those he describes as "naysayers." The numbers, however, seem to refute the idea that libraries are no longer relevant or popular. Wiegand said that as of 2012 — the most recent year for which data is available — there were more U.S public libraries than ever: over 17,000, including branch libraries and bookmobiles. The number of library visits hit about 1.5 billion, marking a slight decrease.

A recent statewide poll by Marquette University showed 56 percent of respondents had used a public library or bookmobile over the past year, and that another 24 percent had been at the library more than a year ago.

Pollster Charles Franklin said one potentially troubling result from the survey is that many of the respondents who reported not using libraries have fewer years of education.

"If you look at just frequency of usage, you see libraries are providing whatever advantages they do … disproportionately to those who are already are advantaged," he said.

'A Destination For The Community'

In some areas of the state, libraries are trying to boost usage among the less well-off by hosting job fairs or job training workshops.

Others, like Milwaukee's East Branch, are offering technology at no cost through services like the laptop computer kiosk.

Collins, the East Branch manager, said libraries like hers, with their meetings spaces and technical amenities, want to engage people and become a place where a community can "get together and talk about issues."

However, the new model doesn't quite work for everyone. One older patron of the East Branch complained there are too few reference books and nonfiction works in general at the new facility.

In addition, many libraries face another hurdle: They aren't able to stay open for as many hours as they used to due to budget cuts.

Milwaukee Alderman Nik Kovac is trying to restore some hours at a half-dozen branches in the city. He said he sees it as an investment in public safety.

"I'm not just saying we're keeping people off the street that might otherwise cause trouble," he said. "There's some truth in that. But you're also creating an environment of empowerment and education."

As of Monday — one day before a final vote on the Milwaukee city budget — Kovac was still looking for savings in other areas that would pay for the expanded library hours.