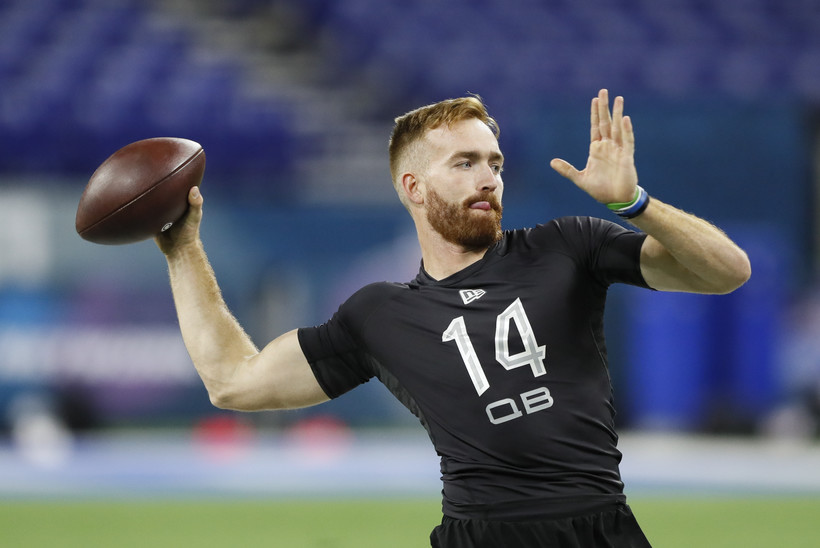 Wisconsin's James Morgan On Preparing For NFL Draft Amid A Pandemic

Morgan Grew Up A Packers Fan. Now He's Hoping To Embark On A Career As An NFL Quarterback
By Megan Hart
Share:

With live sports on hold due to the new coronavirus, this weekend’s NFL Draft is sure to garner a lot of attention from fans.

James Morgan will be watching from his family’s home in Sherwood, near Appleton. Morgan grew up following Brett Favre and Aaron Rodgers. He attended high school in Ashwaubenon, less than two miles from Lambeau Field. His focus, however, won’t be the Packers' first-round pick. Instead, Morgan will be hoping to hear his own name called.

"I went through a lot of bumps in the road throughout my career and things that I didn't anticipate happening, but I'm glad they happened because they taught me a lot about myself and taught me some resiliency and some belief in myself," he said.

Morgan, 23, started his college career at Bowling Green State but transferred to Florida International after a coaching change. There Morgan shined as quarterback of the team's pro-style offense.

He participated in the NFL Combine, an annual scouting event for top college players, earlier this year, where he said he had fun talking football with all the teams.

"I felt good with the way I competed, and it was an awesome experience," he said.

Before the coronavirus pandemic, Morgan had plans to visit several NFL teams. Those meetings had to be moved to Zoom or FaceTime, he said. Morgan said he would have liked to meet with teams face-to-face, but he understands the importance of social distancing.

Plus, playing quarterback is about adapting to new situations, he said.

Morgan has also found ways to workout at home. He’s been running, practicing techniques in the mirror and doing footwork drills in the yard. He’s throwing passes to his dad with his brother playing the role of pass rusher.

"The nice thing, too, about quarterbacks is you don't need a lot of space to be able to get a really good workout in," he said. "You think about the pocket and that's just kind of a confined space."

Morgan has received a lot of support from his family and his former high school teammates, he said. He plans to watch the draft with his family but connect over Zoom with some friends who would have joined them if not for the pandemic, he said.

Morgan doesn’t focus on media coverage, he said. But now his name is being mentioned in headlines next to teams like the Tampa Bay Buccaneers, Tennessee Titans and New England Patriots.

"(I) love playing and to play for a career, that's fantastic and that's where I'm trying to get to," he said.

He hopes his own success in college and possibly in the NFL will help shine a light on all the football talent coming out of Wisconsin, he said.

The draft begins at 7 p.m. Thursday and ends Saturday.

Though states are making plans to re-open their economies, it’s unclear when live sports will resume. According to a Seton Hall Sports Poll, 72 percent of Americans said they’d feel unsafe attending a sporting event before a vaccine is developed for the new coronavirus.