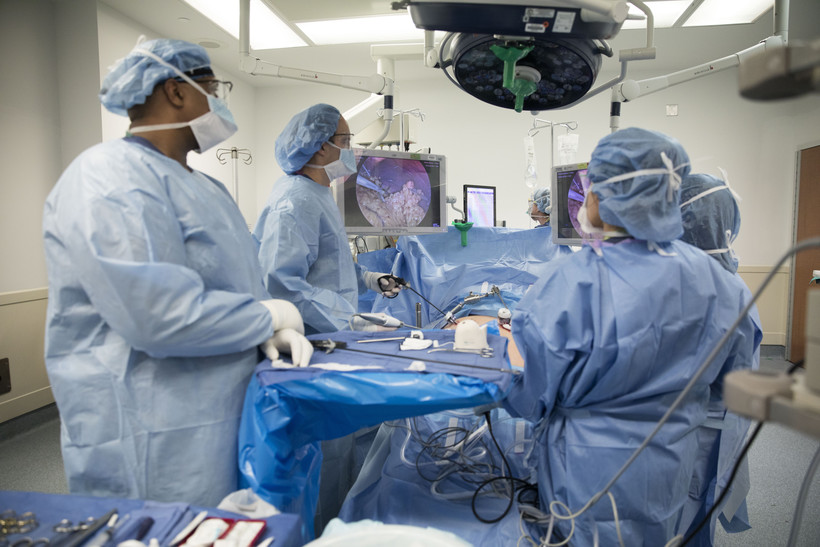 In this Monday, Dec. 16, 2019 photo, Dr. Neil Floch, second from left, performs gastric bypass surgery laparoscopically, using monitors to guide him at Nuvance Health's hospital in Norwalk, Conn. Obesity surgery is becoming a more common way to lose weight, and so is the likelihood of patients getting a second surgery. In 2019, an estimated 15 percent of all obesity surgeries in the U.S. came after a previous procedure, up from 6 percent in 2011, according to a surgeons' group. Kathy Young/AP Photo

On Wednesday, the Group Insurance Board is getting its first review of the benefits of weight loss surgery for state employees since the procedure was approved for coverage in January 2020. That year, 142 state employees had some form of bariatric surgery at a cost of $4.4 million to insurers. Last year, 221 state workers had $7.2 million in weight loss surgery, which studies show can improve other costly medical conditions associated with excessive weight, like diabetes and high blood pressure.

Most of those receiving bariatric surgery identified as female and the average cost of medical services was $31,890.

Joe Nadglowski is president and CEO of the Obesity Action Coalition, a national group that lobbies for coverage of weight loss surgery and obesity medications approved by the Food and Drug Administration.

"They didn’t do that many bariatric surgeries in Wisconsin for state employees considering how many employees you have. And that’s because too few people are willing to ask for help for their obesity," Nadglowski said.

In a memo to the Group Insurance Board, the Wisconsin Department of Employee Trust Funds' Office of Strategic Health Policy noted Wisconsin Medicaid has long covered bariatric surgery as a benefit due to the positive health impacts that extend beyond simple weight loss. For instance, those with diabetes experience improvement following surgery, even if they regain weight, according to the memo.

Dr. Luke Funk, a bariatric surgeon at UW Health, supports insurance coverage for weight loss surgery to treat obesity. He said studies so far indicate bariatric surgery is effective and that such surgery may have positive implications during a pandemic.

"I know we’re toward the end of this latest wave, but we don’t know what the future holds," Funk said. "Given what we’ve been dealing with during the pandemic the last couple of years, bariatric surgery puts patients in a much more favorable position if they contract COVID-19."

Half of the plans in the state’s Group Health Insurance program do not allow bariatric surgery coverage for BMIs lower than 35. Of those that do, all require members to also have a diagnosis of Type 2 diabetes with uncontrolled high blood sugar in order to qualify for surgery. All such surgeries require prior authorization by the patient's insurer.

"The real challenge is a societal view that obesity can be controlled with just behavior change, and the reality is obesity is much more complicated than that," Nadglowski said.

Obesity Action Coalition supports coverage of weight loss medication approved by federal regulators and has long lobbied for Medicare to approve this additional treatment which can help those who may not have a BMI that makes them eligible for bariatric surgery. The coalition hopes Medicare coverage might prompt more employee-sponsored health plans to pay for weight loss medication.

In March, the Treat and Reduce Obesity Act was introduced by Rep. Ron Kind, D-Wisconsin, and others. Lawmakers in support cited Centers for Disease Control and Prevention figures indicating 40 percent of Americans age 60 and older are considered medically obese.

The FDA has approved five drugs — Xenical, Qsymia, Contrave, Saxenda and Wegovy — for long-term use to treat obesity. Last year, Wegovy became the first obesity drug approved by the agency since 2014.