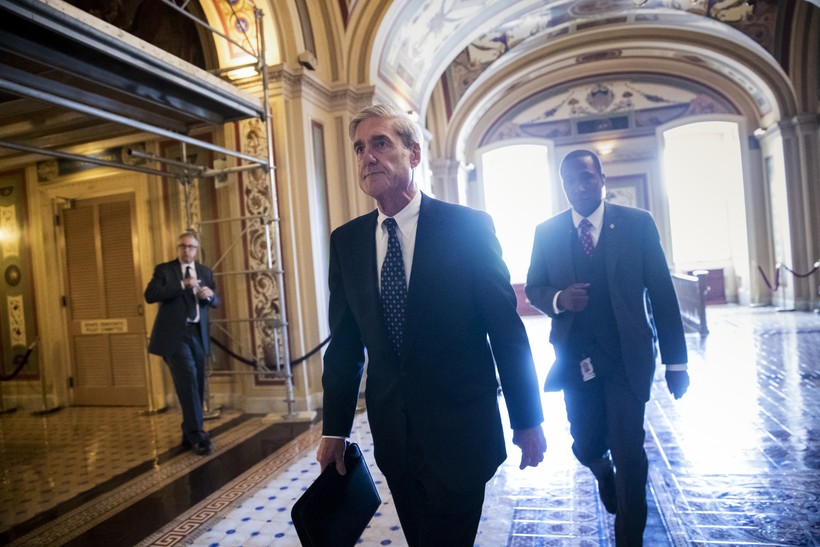 Special Counsel Robert Mueller departs the Capitol after a closed-door meeting with members of the Senate Judiciary Committee about Russian meddling in the election and possible connection to the Trump campaign, in Washington, Wednesday, June 21, 2017. AP Photo/J. Scott Applewhite

Wisconsin's Congressional Delegation Divided On What's Next After Mueller Report

Wisconsin's congressional delegation is divided along party lines on whether U.S. Attorney General William Barr should release the full report by special counsel Robert Mueller's investigation into Russia's interference in the 2016 presidential election.

This week, Democrats said they are unsatisfied with Barr's release of a four-page summary of the long-awaited report this past Sunday while Republicans said that the findings show no evidence of collusion between President Donald Trump's campaign and Russian actors.

Republican U.S. Sen. Ron Johnson, said on Wisconsin Public Radio's "Central Time" on Thursday that everyone should be happy there was no evidence of collusion.

"I'm hoping what it will allow us to do is move beyond these investigations and start addressing some of the enormous challenges facing this nation," said Johnson.

Johnson said those challenges include the humanitarian crisis at the country's Southern border, aggression in the Middle East, ongoing talks with North Korea and the national debt. He added that what he would like to see is as much transparency as possible regarding the report except for information unauthorized for release, such as grand jury testimony or classified documents.

In a tweet on Monday, Democratic U.S. Sen. Tammy Baldwin, also pushed for transparency regarding the findings.

The American people deserve to know why the President has not been cleared of wrongdoing.

In the U.S. House, Democratic U.S. Rep. Mark Pocan said in a statement on Monday that only a handful of people have read Mueller's report and he likewise urged transparency.

"Given Attorney General Barr's role as a political appointee — as well as President Trump's record of essentially firing Attorney General (Jeff) Sessions over fears that he would not protect him, we must demand transparency and read it ourselves to draw our own conclusions," said Pocan in the statement. "The American people deserve the full truth behind the special counsel's report and any attempts to censor it will be unacceptable. Attorney General Barr must release the full report and its findings to Congress and the American people."

Democratic U.S. Rep. Gwen Moore told WPR's "The Morning Show" on Tuesday that it needs to be determined why there wasn't enough evidence to show any obstruction of justice, which was a key finding in the report.

"Mueller having punted the question of whether or not there was obstruction of justice should have gone to the (U.S.) House of Representatives," said Moore. "We are the body that determines whether or not there are impeachable offenses — not the attorney general of the United States."

However, Republican U.S. Rep. Glenn Grothman told WPR on Wednesday that the two-year investigation was nothing more than a ridiculous fishing expedition.

"Donald Trump isn't a perfect man. He tweets too much sometimes," said Grothman. "The idea that there was Russian collusion causing Donald Trump to win the election I just thought was kind of a ridiculous conspiracy theory that only the most extreme people would believe."

Democratic U.S. Rep. Ron Kind told WPR's "Central Time" on Thursday that most of the report should be fair game for the American public.

"We've invested a lot of money in this independent investigation," said Kind. "The bottom line is we're trying to find out if the president of the United States is compromised by foreign governments."

Kind added he would like to see Trump removed from office, but he said it should be up to the American people to decide at the ballot box. When asked whether he would like to see further House investigations, Kind said those are ongoing. He said each branch of government has a constitutional obligation to prevent any overreach of power.

Republican U.S. Rep. Sean Duffy told CNN's Chris Cuomo on Tuesday that the attorney general's summary showed there was never any collusion between the Trump campaign and Russia. He urged Democrats and the media to move on.

"What we can do now is say let's report on all the good news that unemployment is down, salaries are up, that we've crushed ISIS," Duffy said on CNN. "There's going to be far more time for the networks around America to report on the great news that are making Americans lives better."

In a Twitter thread, Republican U.S. Rep. Mike Gallagher said lawmakers need Mueller's full report, but he echoed sentiments from Duffy that Congress should "get to work on the real problems facing this country."

"Part of getting to work means coming to terms with the ugly truths underlying this saga and insuring something like this never happens again," Gallagher said in the tweet. "That means we not only need full disclosure of the report, but also the process that gave rise to the investigation in the first place."

Part of getting to work means coming to terms with the ugly truths underlying this saga and ensuring something like this never happens again. That means we not only need full disclosure of the report, but also the process that gave rise to the investigation in the first place.

"Throughout this process, I have repeatedly said that Special Counsel Bob Mueller should be able to finish his investigation unimpeded and that I would withhold judgment until then. After two years, millions of taxpayer dollars, and the full power of our legal system, Mueller has confirmed that the President did not collude with Russia," Sensenbrenner said in the statement. "The special counsel's investigation was free of political bias, and it will be a mistake for my Democratic colleagues to continue pursuing this disproven narrative for purely partisan purposes. I am eager to read the full report, but today’s top line summary from the Attorney General is a welcomed vindication for the President."

Rep. Sensenbrenner Statement on the Conclusion of the Mueller Investigation:
“Throughout this process, I have repeatedly said that Special Counsel Bob Mueller should be able to finish his investigation unimpeded and that I would withhold judgment until then.

The Associated Press reported Thursday that Barr told the chairman of the House Judiciary Committee that he would testify about Mueller’s report, which is reported to be more than 300 pages.

Editor's note: This story previously reported that Rep. Kind said Trump should be removed from office. The story was updated on Friday, March 29, 2019, at 1:25 p.m. to clarify the congressman's complete remarks.