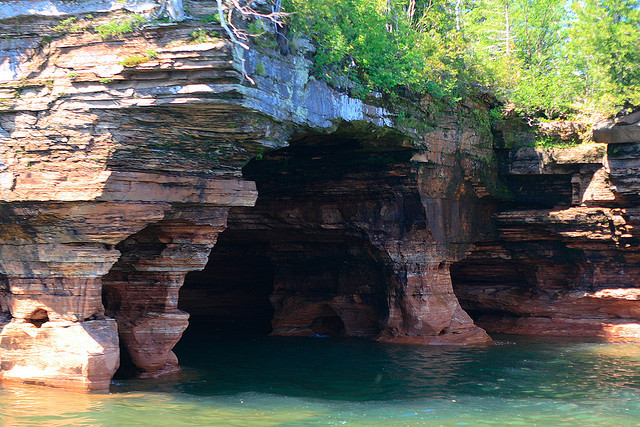 Above, one of the many sea caves that can be explored via kayak at the Apostle Islands. Photo: Sarah Cady.

The ice caves on Wisconsin’s Apostle Islands National Lakeshore drew international attention this winter, but the park is also a treasure for summer adventures.

According to Bob Krumenacker, the park's superintendent, the islands and mainland comprising the national park offer unparalleled warm-weather opportunities for exploring.

For example, now that the islands’ sea caves are no longer accessible by foot, tourists can explore them by kayak. Some caves allow kayakers to paddle inside to take in stunning rock formations created by years of the pounding, Lake Superior surf.

Krumenacker said that it’s possible to fill up half a day, or even an entire day, doing nothing but kayaking.

“I think the freshwater sea kayaking is unparalleled,” he said.

Getting around by boat is the best option, said Krumenacker, but there’s a 12-mile strip of mainland coast for hikers. It features a kayak launch, a beach, and of course, views of Lake Superior.

The Apostles are also home to more lighthouses than any other park in the country. Many of the buildings date back to the 19th Century. For some of them, guided tours are available.

Krumenacker said that if there’s an ideal time to visit, it may be the second half of summer, or just before when school starts when the crowds die down and bug populations have usually diminished.

“There’s something about being on an island,” said Krumenacker. “You realize nature is what matters most.”