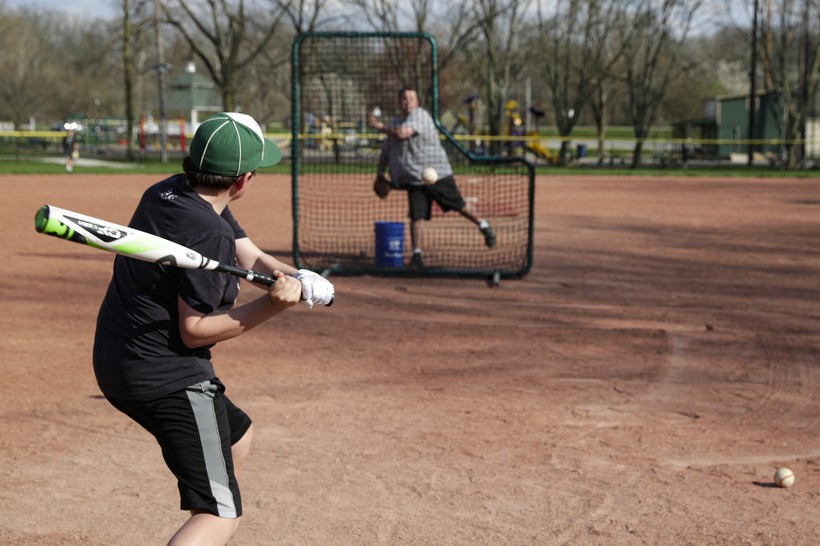 Wes Anderson throws to his son Gabe at Lions Park in Zionsville, Ind., Tuesday, April 7, 2020, as they practice in case baseball resumes after the season was stopped due to the coronavirus outbreak. Officials and experts are estimating tens of millions of dollars in losses for youth sports facilities because of the shutdown. Michael Conroy/AP Photo

Flexibility From Coaches, Parents Will Be Key This Season, League Officials Say
By Megan Hart
Share:

The Wisconsin Fastpitch League (WFL) was set to begin softball season Monday, June 8. The southeast Wisconsin league opted to move opening day to late June as a result of the coronavirus pandemic.

Youth sports leagues across the state are figuring out ways to play this summer amid the pandemic in hopes of offering kids some sense of normalcy. But there’s a lot to consider, said WFL Director Ben Weiler.

"One of the biggest challenges is that there are so many different authorities on this topic that it's hard to even know whether or not to look toward federal guidance, local municipalities, health organizations, political organizations," he said.

The league is balancing those considerations with what teams and families want, Weiler said.

WFL has more than 100 teams. Just two, both run by local recreation departments, have chosen not to participate in this summer’s slightly shortened season. Overall, the league has received a positive response from parents who are excited their kids will have an outlet this summer, he said.

The Centers for Disease Control and Prevention published a list of considerations for youth sports in light of the pandemic. Their recommendations to practice outside and physically separate players are conducive to sports like softball and baseball.

For WFL, safety is going to be the top priority this season, Weiler said. While it may be relatively low risk for a teenager to play non-contact sports outside, it’s important the league not contribute to a larger outbreak, he said.

Over the coming weeks, Weiler plans to keep a close eye on leagues that have already started their seasons and use what he learns to help craft safety guidelines, he said.

Play is already underway for the Wisconsin State Youth Baseball League, which began its season June 1. Things have gone smoothly so far with players and coaches adapting well to changes the league has made, Commissioner Ken Bigler Jr. told WPR’s "The Morning Show."

Players aren’t sharing equipment, umpires are calling games from behind the pitcher’s mound and players are sitting in the stands instead of the dugout, he said.

This year the league has actually added a handful of teams whose regular travel leagues were canceled for the season due to the pandemic, Bigler said.

The goal is for teams to play at least 10 regular season games this year. One of the biggest challenges, he said, has been finding fields to play on with schools and some public recreation facilities closed.

But not all youth sports leagues are moving forward with the season.

In Appleton, the Parks and Recreation Department nixed youth sports programming for the summer, though an adult softball league is underway. The city also recently reopened basketball and tennis courts.

Pam Hammond, executive director of United States Tennis Association (USTA) Wisconsin, said different counties are operating on their own timelines when it comes to allowing young athletes back on the court.

The league is focusing on singles play at the moment, she told "The Morning Show" on Wednesday. It’s advising players to mark their own balls and to use only the balls with their markings for service.

USTA has been providing online workouts for athletes amid the pandemic, she said. It’s also helping clubs get ready to welcome back players. USTA Wisconsin gave out $56,000 in grants to help clubs ramp up their safety precautions, Hammond said.