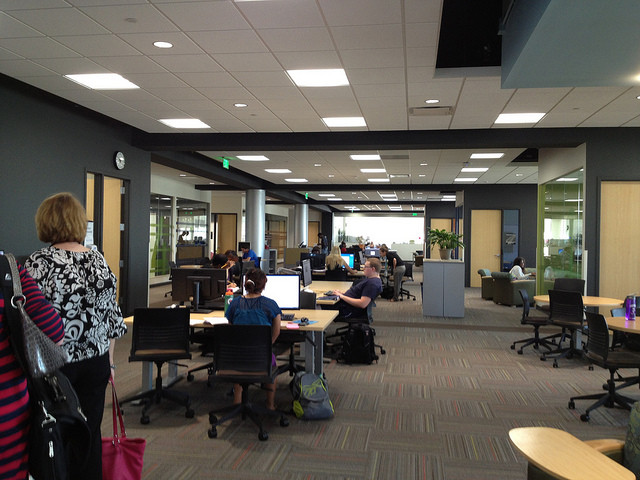 Students studying at Madison College, which along with 15 other technical schools in Wisconsin saw a drop in enrollment over the last two years. Photo: wistechcolleges (CC-BY-ND).

Conor Smyth, the director of strategic partnerships for the Wisconsin Technical College System, said that enrollment has gone down the last two years and it’s not clear how much farther it will drop.

“Despite that, though, our enrollments remain relatively high because they really peaked during the Great Recession,” said Smyth.

Over a two-year period starting in 2008, Smyth said the number of full time students jumped 16 percent. As the economy improved, however, enrollment dropped by 5 percent in 2011 and a little less in 2012.

The enrollment decline comes as the state has tried to beef up technical and vocational training. Employers in certain sectors like manufacturing, information technology and health care say they can't find qualified workers. Recently, Smyth said he met with businesses in the hospitality and tourism sector and heard similar concerns.

“We have employer partners coming to us saying, ‘We need twice the number of graduates.’ In some cases, the colleges simply can't find students who are interested in getting into that program area,” said Smyth.

Of the system’s 16 locations around the state, all but one — Northcentral Technical College in Wausau — saw enrollment drop in the 2012-'13 school year.