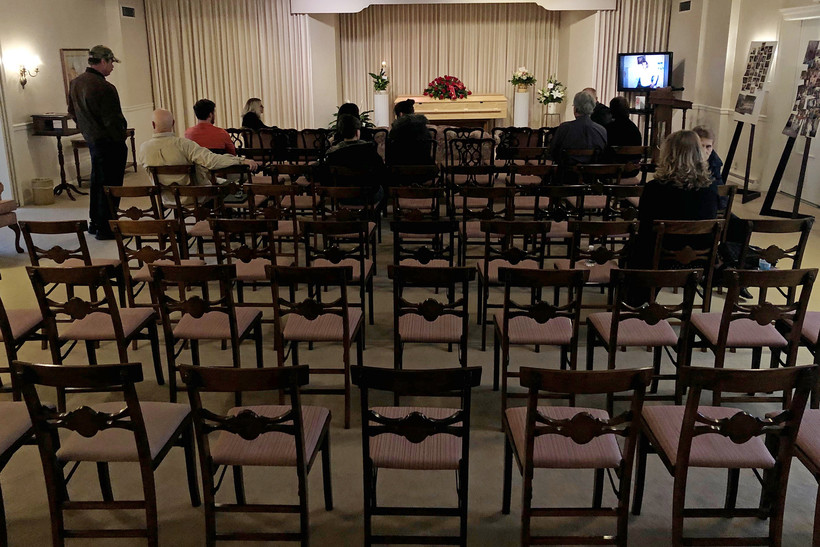 This March 18, 2020 file photo shows a funeral that was affected by new rules put in place due to the coronavirus outbreak in Milwaukee. Wisconsin Gov. Tony Evers restricted gatherings to less than 10 people the day before. As the COVID-19 death toll mounts, faith leaders are grappling with a heart-wrenching question: How do you conduct a funeral in the midst of a global pandemic? Carrie Antlfinger/AP Photo

DHS: 1 In 4 Wisconsinites Age 65 And Up Have Received First Vaccine Dose
By WPR Staff
Share:

Wisconsin reached another grim milestone Friday, surpassing 6,000 deaths due to COVID-19. Still, new cases of the illness are on the decline in Wisconsin, based on the latest data published by the state Department of Health Services.

DHS reported 1,266 new cases of the disease Friday, bringing the average for the past seven days to 1,186 daily cases. Daily new cases have been falling since early January, when the average was nearly 3,000.

There were 28 new deaths from COVID-19 reported Friday. On Friday, 4,460 tested negative.

Of the people tested for COVID-19 over the past week, 18.7 percent were positive for the disease, according to DHS. That rate has been on the decline since early January.

According to DHS, 986,275 doses of coronavirus vaccine have been allocated to Wisconsin by the federal government as of Tuesday, an increase of 139,975 from a week ago.

As of Wednesday, 659,025 doses of the vaccines have been administered. As of Thursday, 143,610 people have received both shots, completing the vaccination series. According to DHS, more than 25 percent of all Wisconsinites age 65 and older have received their first dose of the vaccine.

A graph showing the preliminary daily number of vaccinations across the state shows fewer doses given this week than last week — although doses given tend to dip on weekends.

According to the Wisconsin Hospital Association, there were 594 COVID-19 patients hospitalized as of Thursday. A total of 24,734 people have been hospitalized because of the disease, or 4.5 percent of all positive cases.

The latest figures bring the overall total of positive cases in Wisconsin to 548,221, according to DHS. A total of 6,020 people in Wisconsin have died from COVID-19.

Wisconsin's daily testing capacity, based on the availability of test supplies and adequate staffin,  has grown from 120 available lab tests in early March to 59,273 as of Friday. The number of actual people with new test results reported Friday was 5,726.