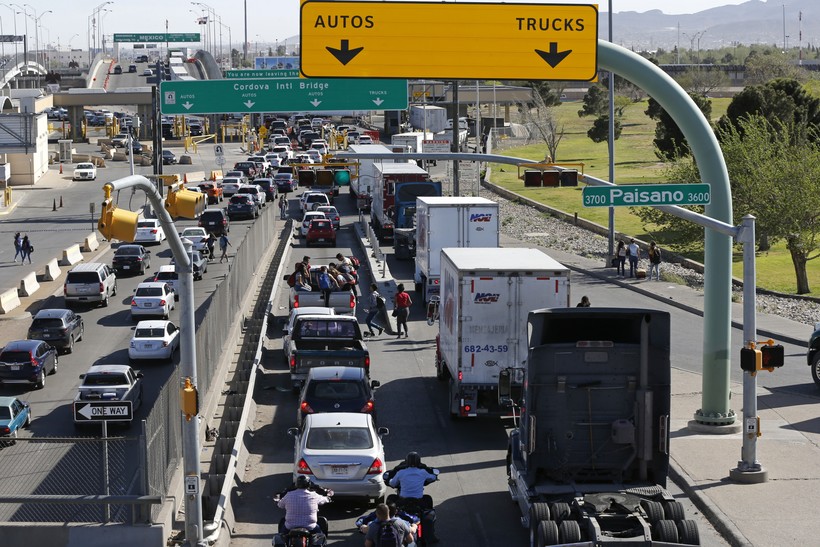 Cars and trucks line up to enter Mexico from the United States at a border crossing in El Paso, Texas, Friday, March 29, 2019. Gerald Herbert/AP Photo

Report: After Threatening To Close Part Of Border, Trump Now 'Looking At All Options'
By Danielle Kaeding
Share:

Wisconsin senators say President Donald Trump’s threats to close the United States-Mexico border would hurt the U.S. economy. However, the Associated Press reports the White House is walking back the president’s remarks and "looking at all options" on whether to close ports of entry.

The Associated Press reported Tuesday that Trump is taking a "wait-and-see" approach on closing the border this week after threatening last week to close "large sections" of the southern border unless authorities from Mexico immediately halt all illegal immigration.

"Recognize (that) if we close ports of entry, there’s so much commerce, component parts, you start shutting down manufacturing plants in the United States," Johnson said. "So, that would be a self-inflicted wound."

In a statement Tuesday to Wisconsin Public Radio, Democrat U.S. Sen. Tammy Baldwin said Trump’s threat to shut down the border would have a "devastating impact on the American economy."

"In Wisconsin, shutting down trade would hurt our agriculture economy at a time when we need to increase market access in Mexico for our Wisconsin dairy farmers and cheese makers," said Baldwin in the statement. "Congress just provided the Department of Homeland Security with $1.375 billion for smart, cost effective border security, $415 million in humanitarian assistance, and $570 million for specialized screening equipment at our ports of entry to detect illegal drugs and prevent human smuggling."

Baldwin said the president should put those funds to work rather than "creating more chaos and hurting our economy."

"Not indefinite detention, but maybe two or three or four months so we can adjudicate their claims," Johnson said.

The Flores settlement prevents the government from holding migrant children longer than 20 days, according to National Public Radio. NPR reported in June that Trump told then-Attorney General Jeff Sessions to seek permission from the federal court to change the agreement, which would allow children and families to remain together in detention with no time limit.