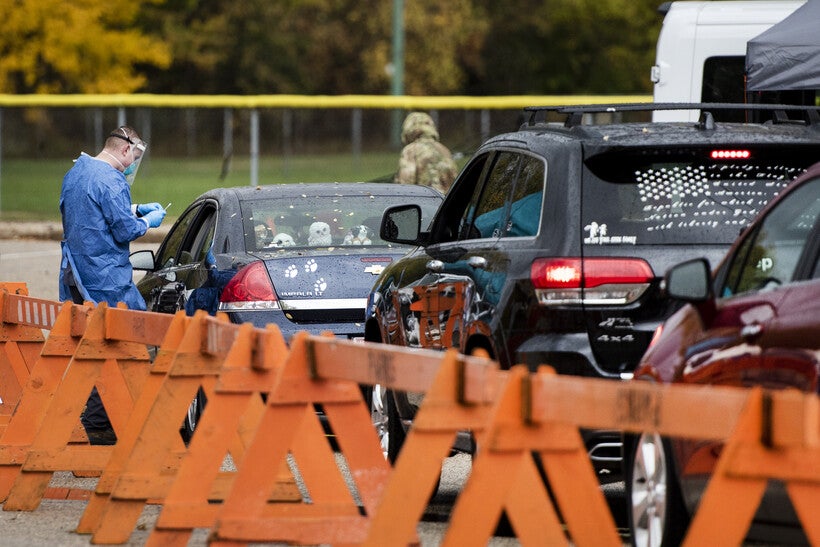 A COVID-19 test technician holds a swab as he approaches a vehicle Monday, Oct. 12, 2020, in Janesville. Angela Major/WPR

Since the last update Friday, DHS has recorded 7,705 new COVID-19 cases and 26 new deaths. Here's the daily breakdown from the agency:

As of Sunday, the seven-day average for positivity by person was 21 percent. That number has been steadily rising since a dip in August.

On Sept. 30, DHS also introduced an alternative positivity rate, one that measures the percentage of tests that are positive, instead of the percentage of people who get a positive result. The new metric takes into account people who have been tested multiple times. As of Sunday, the seven-day average for that number was 11.7 percent.

According to DHS, there were 1,090 COVID-19 patients hospitalized as of Sunday. Nearly 300 are in intensive care, and 455 are receiving mechanical ventilation, according to DHS. A total of 9,319 people have been hospitalized because of the disease, or 5.4 percent of all positive cases.

The latest figures bring the overall total of positive cases in Wisconsin to 173,891, according to DHS. A total of 1,600 people in Wisconsin have died from COVID-19.

COVID-19 activity varies heavily from county to county. The latest county and regional activity data from DHS, released last Wednesday, showed 57 counties had a "very high level" of COVID-19 activity, two higher than in the previous week's report. The rest had a "high" level of activity. Wisconsin overall had a "very high" level of activity, according to DHS.

On Oct. 14, the state's Fox Valley region had the most new cases per capita over the previous two weeks, while Wisconsin's South Central region had seen cases rise most rapidly.

Despite the growing number of cases in the South Central region, President Donald Trump held a large rally in Janesville on Saturday.

Wisconsin's daily testing capacity — based on the availability of test supplies and adequate staffing — has grown from 120 available lab tests in early March to 42,451 as of Monday. The number of actual people with new test results reported Monday exceeded that number, likely as a result of delayed reporting due to site maintenance.