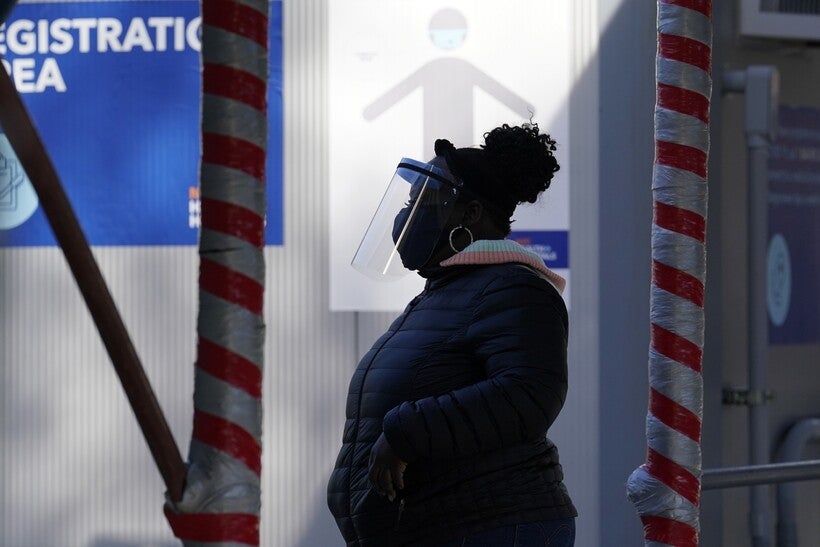 A worker wearing a protective face shield checks for open windows at a New York City Health + Hospitals COVID-19 testing site in the Brooklyn borough of New York, Thursday, Nov. 19, 2020. Although lines at this location didn't appear long, some people waiting in line said they'd been standing outside the gate more than two hours to get a rapid coronavirus test, which aren't offered at all the sites. Kathy Willens/AP Photo

New reports of COVID-19 cases are declining in Wisconsin but deaths in the state reached another record high on Tuesday, with 107 new deaths reported, topping 100 for the second time in a week, based on the latest data published by the state Department of Health Services.

DHS reported 4,078 new cases of the disease Tuesday, bringing the average for the past seven days to 3,905 daily cases. On Tuesday, 6,414 tested negative.

Of the people who got tested for COVID-19 over the past week, 30.1 percent were positive for the disease, according to DHS. That rate has been on the rise since Friday when it dipped to a level not seen since the end of October.

On Sept. 30, DHS also introduced an alternative positivity rate, one that measures the percentage of tests that are positive, instead of the percentage of people who get a positive result. The new metric takes into account people who have been tested multiple times. The seven-day average for that number is at 13 percent.

According to the Wisconsin Hospital Association, there were 1,845 COVID-19 patients hospitalized as of Monday. A total of 17,372 people have been hospitalized because of the disease, or 4.4 percent of all positive cases.

The latest figures bring the overall total of positive cases in Wisconsin to 391,313, according to DHS. A total of 3,420 people in Wisconsin have died from COVID-19.

Wisconsin's daily testing capacity — based on the availability of test supplies and adequate staffing — has grown from 120 available lab tests in early March to 59,549 as of Tuesday. The number of actual people with new test results reported Tuesday was 10,492.