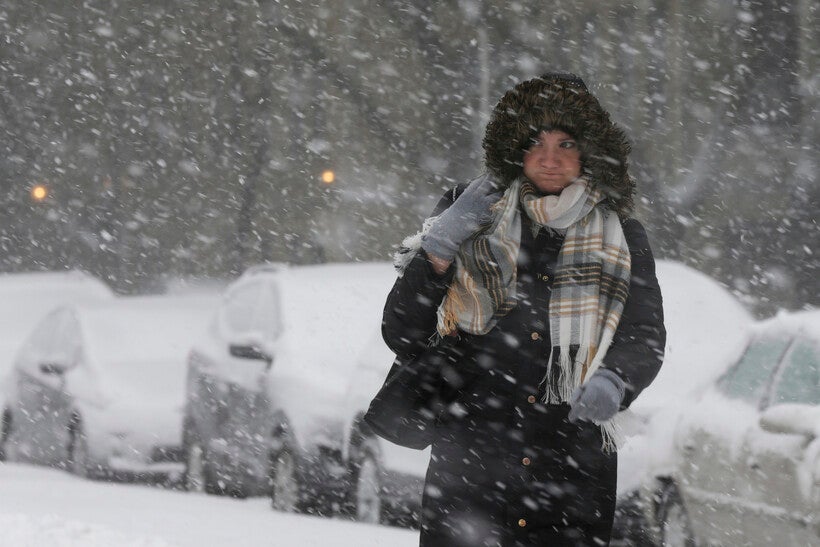 A commuter walks to a bus stop as snow falls, Monday, Nov. 26, 2018, in Chicago. A wintry storm brought blizzard-like conditions to parts of the Midwest early Monday, grounding hundreds of flights and causing some road traffic chaos as commuters returned to work after the Thanksgiving weekend. Kiichiro Sato/AP Photo

Wisconsin Prepares For Frigid Temps As Snow Moves Through Midwest

Much of Wisconsin woke up Monday to another significant snowfall.

Parts of southeastern Minnesota and southeastern Wisconsin have seen more than a foot of snow fall as a powerful storm that's expected to bring frigid temperatures moves through the Midwest.

In Sheboygan, 15 inches of snow had fallen by Monday afternoon. In Rochester, Minnesota, nearly 9 inches had fallen. It's all part of a weather system that has blanketed both states with snow amounts ranging from 6 inches to a foot of snow in some areas.

Timm Uhlmann, a meteorologist with the National Weather Service in Green Bay, said the heaviest snowfalls were expected in the Fox Valley and along the Lake Michigan shore because of lake-enhanced snowfalls.

Gusty winds could cause blowing and drifting snow at times, especially Monday afternoon and evening.

Highways throughout Wisconsin are snow covered. Remember these steps if you have to travel today:
✔️ Plan ahead and check https://t.co/tEYNFnTTov BEFORE you leave.
✔️ Buckle up!
✔️ Leave room to brake: 🚚---🚗---🚙
✔️ Both hands on the steering wheel. Put down the phone! 📵 pic.twitter.com/JF060TL3E2

Gov. Tony Evers declared a state of emergency Monday afternoon because of the snow and impending dangerously cold temperatures.

Evers signed the order Monday that directs all state agencies to assist if any emergency response and recovery efforts are needed because of the snowstorm and cold that has hit Wisconsin, Illinois, Minnesota, Michigan and other Midwestern states.

Evers is also activating the Wisconsin National Guard to assist with local emergency responders, if necessary.

Lori Diesburg was digging her way out of around 6 inches of snow Monday in Eau Claire when she said she was conflicted about the storm.

"Well, at first I thought it was pretty and then after that it was miserable," Diesburg said.

She said she plans to avoid the dangerous temperatures and wind chills coming Tuesday and Wednesday if at all possible.

"So, time to hunker down and stay inside and watch movies," Diesburg said.

Bill Horlacher had just finished snowblowing his driveway Monday in Eau Claire when asked for his thoughts on the freshly fallen snow.

"We don’t need it," Horlacher said. "It was nice before, but oh well, it’s January."

He said he's looking forward to putting the potentially historic cold weather behind him.

"I don’t like that," Horlacher said. "The next three days are going to be bad. Bad weather. Too cold."

Frigid Temperatures On The Way

The snow is to be followed by temperatures not rising above zero through Thursday night, with wind chills as low as 50 below zero.

Here's a timeline of the wind chill headlines that we have out this week. Tuesday night through Thursday morning is going to be the worst of it. Please do what you can to limit your time outdoors over this time. #wiwx pic.twitter.com/3hmf6vRHjb

Milwaukee, Madison and Janesville public schools were also closed Monday. Click here for a list of other school closures and delays.

It was announced Monday afternoon that schools in Minneapolis were shutting down through Wednesday as the dangerous cold hits the Midwest.

The school district had already canceled classes Monday due to a snowstorm.

Back in Wisconsin even the fabled "frozen tundra" of Lambeau Field wasn't able to withstand the heavy snow and blustery winds that closed hundreds of businesses, schools and government offices Monday.

The Green Bay Packers said stadium tours, the Lambeau Field Atrium and all its businesses, including the Packers Hall of Fame and the team's pro shop, are closed to visitors Monday.

Travel in the Midwest has also been impacted. More than three dozen flights were canceled early Monday at Mitchell International Airport in Milwaukee. The Associated Press reported more than 1,000 flights have been canceled at Chicago's largest airports.

The National Weather Service issued a winter storm warning in southern, central and into northeast Wisconsin through 6 p.m. Monday.

The winter storm warning means "severe winter weather conditions will make travel very hazardous or impossible," according to the weather service. The weather service advised people who must travel to keep an extra flashlight, food and water in their vehicle in case of an emergency.

As the storm moves through, travel became more difficult and conditions affected the Monday morning commute and will impact the evening commute as more snow is expected to fall throughout the day.

Snow mixed with freezing rain persists to the east with more snow expected to push in later this morning and into the afternoon. #swiwx pic.twitter.com/0MJO66q2Jt