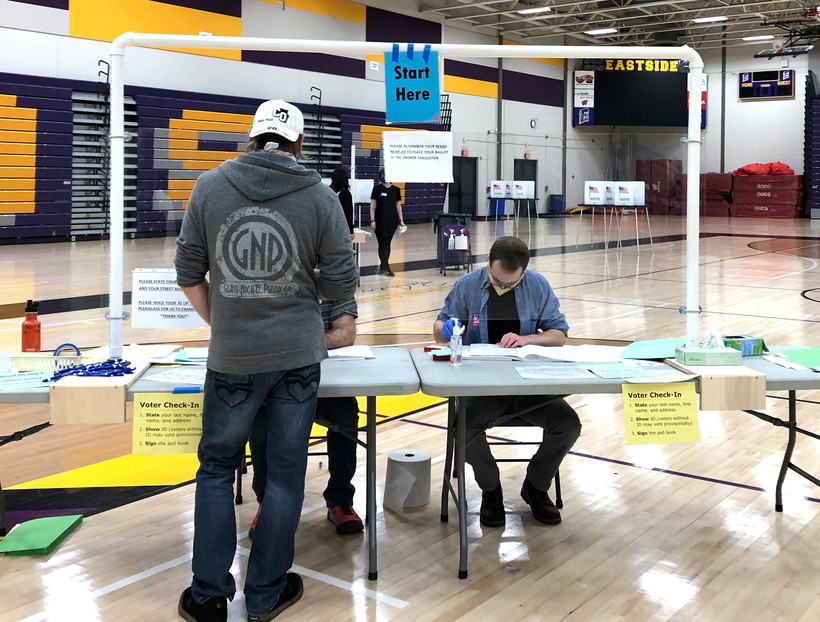 A voter checks in with poll workers before casting his ballot at Madison East High School during Wisconsin's spring election on April 7, 2020. Molly Stentz/WPR

Wisconsin Mayors Keep An Eye On Safety Ahead Of Election Day

On the eve of Election Day, Wisconsin's Democratic and Republican Party chairs, and mayors of the state’s largest cities are hoping for a last-minute wave of voters that could push GOP and Democrat candidates to victory at the local and national levels.

But safety issues, both because of the coronavirus and possible voter intimidation, loom over the election. As a result, national and local officials are taking precautions.

The U.S Department of Justice is sending personnel to monitor for compliance with federal voting rights laws in 44 cities across the country, including Milwaukee. Mayor Tom Barrett said Monday afternoon he has not been told which of the city’s 173 polling locations the monitors will be at.

"We will have a lot of mechanisms in place. We will not in any fashion tolerate intimidation. We are not allowing guns (at) the polling places," said Barrett during a media call with other mayors from the cities of Madison, Kenosha, Racine and Green Bay.

Many of those cities will have more polling locations than in the spring primary. This, the mayors said, will mean fewer crowds and less chance of spreading COVID-19 at a time when cases of the virus are surging. The spring primary was the state’s first election during the pandemic, and a shortage of poll workers forced cities to consolidate locations.

Many have already cast their ballot in person or by mail. As of Monday morning, nearly 1.9 million people, or 51 percent of registered voters, had returned ballots, according to the Wisconsin Elections Commission. Many did so to avoid potential crowds at polling places.

However, some of the biggest crowds came during the campaign season. Democratic presidential nominee Joe Biden has favored virtual and drive-in rallies to promote social distancing, while President Donald Trump has had both indoor and outdoor events with large crowds of often unmasked supporters. On the eve of the election, Trump will be visiting Kenosha again.

"Wisconsin has been hit hard by COVID and it is not getting better. It is continuing to spread, and that is a concern whenever we have large groups of forming for these types of gatherings," said Kenosha Mayor John Antaramian during the press conference Monday.

The chair of the Republican Party of Wisconsin, Andrew Hitt, defended how Trump has handled the pandemic by promoting accelerated vaccine development and various treatments for COVID-19.

"As we see the growing outbreak across Europe, we know that this virus is difficult. It is hard to contain. The only way that we’re really going to get this under control is through a vaccine, through therapeutics," Hitt said Monday on WPR’s "The Morning Show."

The pandemic response along with the economy and other issues could decide not only the presidential race but local elections where a number of state Assembly and Senate seats are up for grabs.

Republicans have focused on increasing their majority to have enough votes to override Gov. Tony Evers vetoes. Democrats have spent more than $2 million on six key legislative races to protect the governor’s veto power. Republicans need to flip three seats each in the Senate and Assembly to get a super majority.

Wisconsin, which went to Trump by a slim margin in 2016, is considered a key swing state for both presidential candidates. And several legislative seats are competitive, making this a highly watched election.

But results may not be known right away.

"It is more important to be accurate than fast," said Madison Mayor Satya Rhodes-Conway, who expects returns late in the evening but did not specify a time.