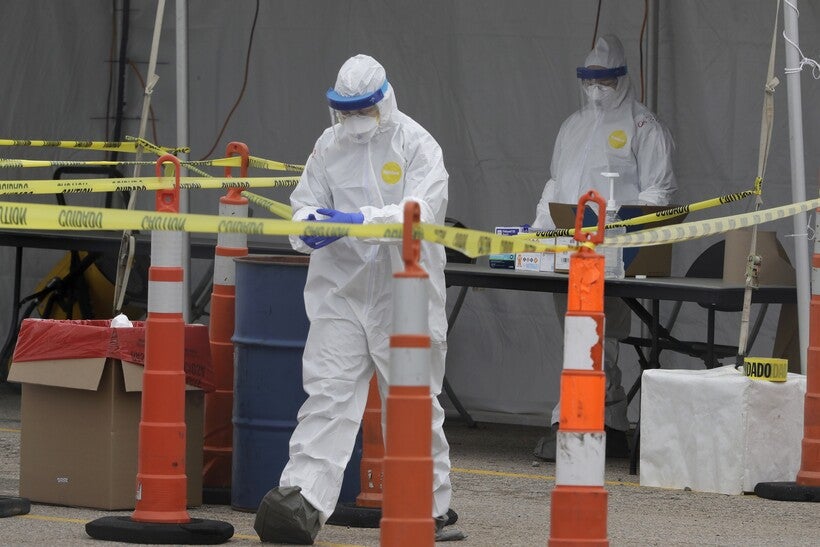 A medical worker in protective garments, center, adjusts their gloves, while walking past caution tape at a drive-through testing site for the coronavirus in a parking lot at Gillette Stadium, Sunday, April 5, 2020, in Foxborough, Mass. The site, which opened Sunday, is designated specifically for police officers, firefighters and other first responders who may have been exposed or are showing virus symptoms. The new coronavirus causes mild or moderate symptoms for most people, but for some, especially older adults and people with existing health problems, it can cause more severe illness or death. Steven Senne/AP Photo

With the demand for personal protective equipment, or PPE, increasing, companies throughout the state are ramping up production to help health care workers stay safe while caring for those with COVID-19.

Medline Industries, Inc. announced in March that they were converting one of their Hartland manufacturing lines to produce 150,000 bottles of hand sanitizer a week by mid-April.

Medline decided roughly a month ago to boost their production of hand sanitizer, basing the need on what was happening in the health care industry.

"Hand sanitizer overall was in huge demand," Alan Weiss, the division president at Medline, said. "We needed to do something."

So far, Medline has produced 450,000 bottles of hand sanitizer since starting production April 6.

"We are going to continue to produce hand sanitizer at this facility as long as we see that there is a need in the market that isn’t being fulfilled," Weiss said.

Weiss said there are roughly 120 people working at the Hartland facility. Fifteen of those employees are dedicated to manufacturing sanitizer.

The company has a goal of making 400,000 bottles per week within the next few weeks.

The sanitizer is being distributed to hospitals, laboratories and nursing homes throughout the United States.

"The solution to this problem lays in all of our hands, pardon the pun as the hand sanitizer guy," Weiss said lightheartedly. "The solution really is that we follow the guidelines that the government agencies are setting out for us."

Foxconn Technology Group announced they started producing procedural masks at their Mount Pleasant plant in response to the pandemic. The masks are being created for general use by law enforcement, pharmacists, caregivers and medical professionals.

"Foxconn’s founder, Terry Gou, has heard the call from federal and state elected leaders for industries and businesses to pull together their resources and do their part in the fight against COVID-19," said Dr. Jay Lee, board member and vice chair of Foxconn Technology Group, in a press release dated Monday.

The Boldt Company teamed up with architecture, engineering and planning firm HGA to create a solution to address hospital bed shortages across the nation.

The STAAT Mod was designed by HGA and constructed by The Boldt Company. The critical care units have Airborne Infection Isolation rooms, and are designed to be a stand-alone facility or can be connected to an existing structure.

The STAAT Mod, designed by HGA and constructed by The Boldt Company, is a critical care unit with "true Airborne Infection Isolation rooms" that are designed to be a stand-alone facility or can be connected to an existing structure. Rendering courtesy of HGA

"They are individual patient treatment rooms that’s basically a containment center," Dave Kievet, chief operating officer of the Boldt Company explained. "So to put it into layman’s terms they are almost like ICU units."

The temporary critical care modules can be deployed quickly to help aid hospitals caring for patients suffering from the coronavirus. The modules will allow for additional space, and they're created to fit the needs of a facility.

Kievet said the Boldt Company had been working on unit prototypes when the coronavirus hit, and they teamed up with HGA to create the STAAT Mod. They also collaborated with Faith Technologies, Inc., IMEG, and Tweet/Garot.

"For this whole process to go from concept to actually shipping these units out in five weeks would’ve been a difficult process had we all been sitting in the same room collaborating around a conference table or a drawing board," he said.

There are multiple different versions of the modules. There are some with eight beds, 16 beds, and 32 beds. Kievet said a facility in Maryland placed the first order and their unit will ship out from Appleton this week.

"It’s really to meet the needs of the people," Kievet said. "I think that is what’s so fun and why the team collaborated so well. It was the fact that we were serving a purpose, it wasn’t just building a building, we were actually putting together a facility so that we could potentially save lives."