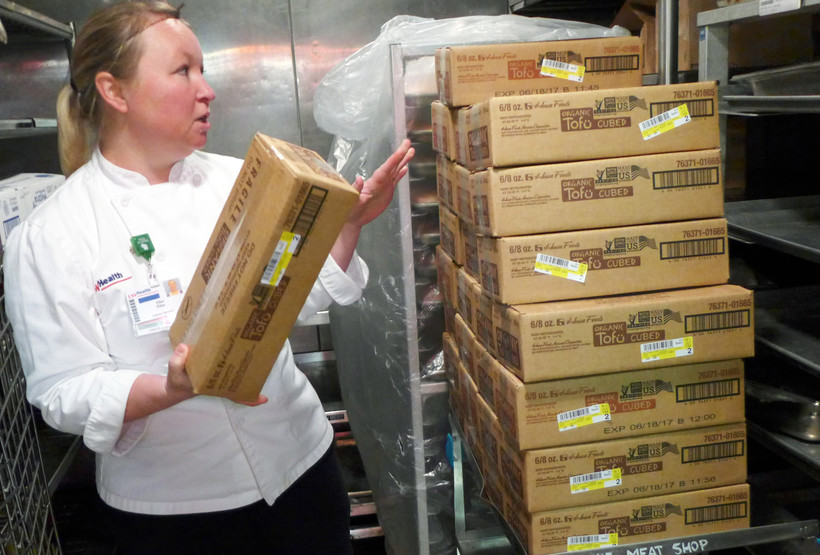 Hospital food, once the butt of jokes, is changing. Some Wisconsin hospitals are aiming to serve food as fresh and appetizing as a meal cooked at home or in a decent restaurant.

But the food isn't just meant to please taste buds. Some hospitals are looking at the big picture: trying not only to serve food that's good to eat, but is purchased locally and raised in a way that doesn't damage the environment. In a word: sustainability.

"When you look at the amount of money we spend and the volume of food we purchase every year, there’s a big need to do it in a very smart way," she said.

Ritter cites studies compiled by the American Independent Business Alliance which show, on average, 48 percent of every purchase at a local independent business recirculates locally as compared to 14 percent through a chain store or big distributor.

"So that’s huge, if we can keep almost half of every dollar spent recirculating here in our county or in our state," Ritter said.

With 2.7 million meals served a year at University Hospital and the nearby American Family Children's Hospital in Madison, it's a big operation.

UW Health uses large food distributors to get everything from fish to produce. But operating on a big scale doesn't mean they can't think small, Ritter said.

University Hospital in Madison is trying to use more Wisconsin grown food and has reduced the price of salads in an effort to get people to eat better. John Maniaci/UW Health

"We really try to work with those big distributors to bring on local products and use our buying power in a positive way," Ritter said. "We use Sysco, and they recently became a member of Fifth Season Cooperative, so now we're able to source all of our frozen vegetables locally, most organically."

UW Health has been working toward more sustainable food options since last year. Now, on delivery days, the loading dock at University Hospital is filled with crates, not boxes, of fruit and vegetables.

"So this is our produce we actually just recently switched over. All of our produce used to come in cardboard boxes. And now it comes in these crates. They're reusable," Ritter said. "We did it to try and cut down on the vast amount of cardboard that we were generating everyday."

UW Health tries to steer patients, visitors and staff toward vegetable entrees by offering them at a lower cost than cheeseburgers or other entrees.

At Gundersen Health System in La Crosse, they also have implemented the Less Meat, Better Meat Initiative, which is part of Practice Greenhealth, a nonprofit aimed at helping the health care sector create sustainable services for the environment, staff and patients.

"We are increasing the number of vegetarian options we have available. And with the money saved there, we'll be able to put that money toward sustainable food such as beef and chicken that are a higher price," said Sara Ashbeck, food service program director at Gundersen. Ashbeck said grass-fed beef and pasture-raised chickens produced without antibiotics can be twice the cost of conventional meat and poultry. It also can be hard to find.

"We are teaming with a number of other health care systems across the nation, along with Health Care Without Harm, and we’re joining forces, and we’re going to find available, affordable sources," Ashbeck said.

Ashbeck said the conventionally raised beef they now buy costs $2.50 per pound. Grass-fed beef they plan on purchasing is almost $6 per pound.

But some hospitals are choosing to focus less on the bottom line because they believe the benefits to human health, the environment and local economy are priceless.

Editor's Note: This story is Part 2 of a two-part series on superbugs and sustainable food options in Wisconsin's health system. Read Part 1 here. Journalist Avory Brookins contributed to this series.