A bipartisan bill looking to encourage hemp production in Wisconsin is moving to a vote in the state Senate after passing the chamber's committee on agriculture with unanimous support last week.

The Growing Opportunities Act would make the pilot program for growing hemp in the state permanent.

Rob Ferret: What does this bill do?

Rep. Dave Considine: The federal Farm Act of 2018 legalized hemp on a federal level, took it off the Class 1 list, we can transport it state to state as long as we certify that it's industrial hemp. It gave states a year basically to approve some sort of regulations on our own. So that's the rush here. If our state doesn't get it done by the end of this year then we’ll be responsive to federal guidelines, which I don't think maybe is encouraging, as what we'd like to see on a state level.

RF: Why is it important for us in Wisconsin to set our course on hemp policies versus letting the federal government do that?

DC: Wisconsin has in the past been a leader in hemp production and in order to maintain that lead we need to encourage diversity in Wisconsin agriculture, allow farmers to make this investment. Some of it really intense investment, and some of it less intense. Hemp can be grown for a number of different reasons.

But especially now in this climate we have our own testing program on a state level and I think that's really important not to be responsible to a federal testing program.

RF: And we're testing for things including the absence of THC to make sure this is hemp and not anything that can be confused for marijuana?

DC: Not the total absence, there's a threshold — 0.3 percent. Other states have gone to 1 percent. We struggled with that somewhat in the state of Wisconsin, I think eventually we will get to that, but there's a lot of fear about how to enforce these laws and I understand that. The state patrol and other law enforcement organizations were not in favor of this bill and opposed it until we made some changes in how they could enforce it.

RF: Have we seen with the pilot program, so far, a lot of farmers getting on board with growing hemp?

DC: We've had massive numbers of farmers, this time it's in the thousands. The number of processors that have registered is in the hundreds. Some of them are well off the ground, some of them are still trying to get off the ground. Many of them are smaller farms who are not only harvesting the hemp and growing the hemp, they're also processing it themselves, I have a number of those in my district who will process it on their own farm.

RF: One concern that's come up for new farmers is the difficulty of getting crop insurance in the past and maybe of getting upfront loans from banks who are not sure if they're ready to deal with his new product yet. Do you see anything on the landscape there?

DC: Banks are working very hard to try to figure out how to come up with a way of doing it because banking regulations, it's still a little iffy how that's back and forth between the marijuana laws and industrial hemp. And so they're a little worried. They're conservative, and they should be, but they want to serve this industry.

I just attended a banking convention in Wisconsin Dells — Attorney General Josh Kaul was there, (Wisconsin State Treasurer Sarah) Godlewski was there — talking about how we can encourage banks and help them to make this transition. I think we're going to get there for next year's crop.

RF: We saw again bipartisan support in the Senate Agriculture Committee. Is it going to pass the Senate and Assembly where you need support from both parties?

DC: I think so. I think the only hurdle we had was from the law enforcement agencies and they're at least neutral. They're not saying they're in favor of it, but they have moved to neutral with the concessions we made in the Senate amendment. And we have so many associations and organizations in the state of Wisconsin that are in support of getting this passed because we need to allow diversity in our agriculture, we’re losing farms like crazy. 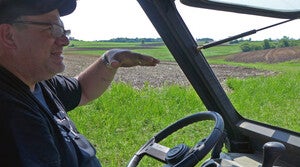 A bill aimed at encouraging hemp production in Wisconsin passed out of the Senate's committee on agriculture with unanimous support. We talk to one of the co-authors of the legislation for an update on its status and how it would work.