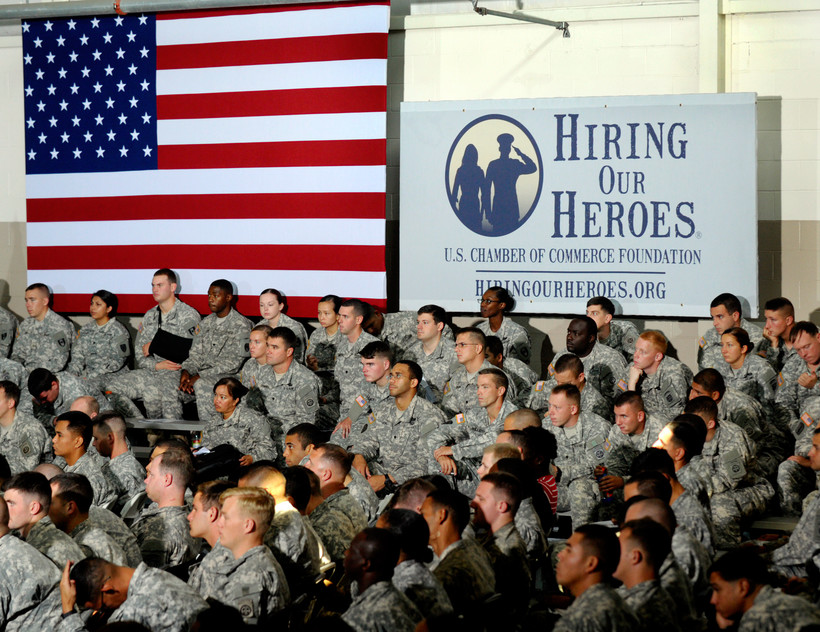 Walker Said He Sees The Grants As A Way To Better Transition Veterans Back Into Civilian Life
By J. Carlisle Larsen
Share:

The state will supply $400,000 in grants to six nonprofits that provide entrepreneurial training and assistance to Wisconsin veterans. The funding was announced on Monday by Gov. Scott Walker and Wisconsin Department of Veterans Affairs Secretary Dan Zimmerman as a way to encourage veterans to start businesses in the state.

In a statement, Walker said the grants will not only help veterans but hopes they will have a far-reaching, positive impact.

"For their sacrifice and service, our veterans deserve every opportunity to pursue their dreams," Walker said. "These grants allow nonprofits to help make Wisconsin veterans' dreams of business ownership a reality, which ultimately enhances our communities and our state as a whole."

Nearly $239,000 will go to Bunker Labs, Madison which provides entrepreneurial training to veterans through their "Innovator Academy." Veterans that work with Bunker Labs have access to educational resources and capital while receiving guidance on how to hone their business skills. They also build relationships with other veterans looking to start businesses.

Michael Ertmer, the executive director of Bunker Labs, Madison, and a former captain in the Army, said there are a number of challenges facing veterans transitioning from active duty to the civilian economy, such as a smaller professional network to rely on when they return home from their service.

"Even when people are deployed as reservists — and they deploy for six, or 12 or 18 months — everybody else's life kind of continues and business continues," Ertmer said. "And (the returning veteran's) professional networks have all been shifted. So, even if they come back to the same position in the same city, (their) network has changed."

Ertmer said while veterans are generally attractive to employers, myths about service members can follow them as they begin looking for jobs. Namely, he points to the persistent belief that veterans are rule followers and can't innovate in the workplace.

"If you look at the current generation of veterans who are deployed doing, arguably, economic development or country building, they're trying to help foster economic activity and fight a war," Ertmer said. "I can't imagine anything more fundamentally entrepreneurial than taking on challenges like that."

This sentiment is echoed by veteran Brandon Shields. Shields served in the Marine Corps for more than six years and is working on a child care business concept at Bunker Labs, Madison. He's also working on his MBA at the University of Madison-Wisconsin while raising a son as a single-dad.

Shields said he believes veterans can make some of the best entrepreneurs because they're willing to take risks.

"When you're used to having bullets flying by your head, it makes it a little easier to jump into launching a new business," Shields said. "You're not as afraid of failure because the situations that you faced before were a bit more dramatic than losing a couple thousands of dollars on trying an early stage business."

Others, like Chris Johnson, believe the determination to succeed also helps veterans when starting businesses. Johnson is an Air Force veteran and works as a commercial pilot. He started his own pilot training business in 2011 after completing his doctorate at UW-Madison. He has relied on groups like Bunker Labs, Madison to grow his business and be able to adapt it to other markets, like the unmanned aircraft industry.

But Johnson said veterans looking to start their own business need to be sure they're passionate about what they're doing.

"Pursue something that you can eat, sleep, and breathe and keep getting up when you fail," Johnson said. "Because perseverance is one of the number one traits that I would see among military entrepreneurs that makes them positioned for success."

According to the Wisconsin Veterans Chamber of Commerce, more than 10 percent of businesses are owned by veterans and these businesses add an estimated $20 billion dollars into the state's economy annually.

The other nonprofits receiving funding include: