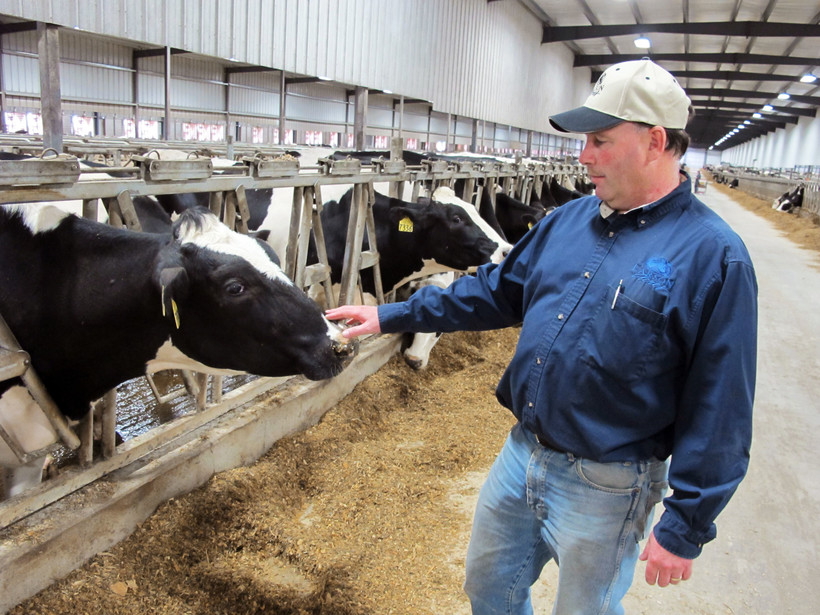 A dairy farmer with his 2,900 dairy cows in Magnolia, Wis. Dinesh Ramde/AP Photo

From low milk prices to rising tariffs to uncertainty over a new farm bill, Wisconsin’s agriculture industry has struggled for years. And for dairy farmers the picture is particularly grim.

But those issues aren’t what’s harming farmers the most, according to Kara O’Connor, government relations director of the Wisconsin Farmers Union.

It’s overproduction, a practice that benefits every sector of the agriculture industry besides the farmer, she said.

"The faster the farmers' wheels turn, the more profit all of those other parts of the agricultural economy reap," O’Connor said. "The problem there is that those profits don't accrue to the farmer."

It's not an exaggeration to say we have a crisis in farm country, she said. Wisconsin is on pace to lose more dairy farms in 2018 than any other year since at least 2003, according to the United States Department of Agriculture.

Yet, more milk is being produced. And when oversupply is high, the price drops and farmers’ profit margins diminish because of the glut of milk on the market.

"Oddly, usually when that happens cow numbers go down as people go out of business," she said.

But what has happened instead is cow numbers have stayed the same, even increasing, which has exacerbated the problem, O’Connor said.

Dairy herds have dropped to nearly half their numbers since 2003, but the number of dairy cows has increased by nearly 3 percent during the same time frame, largely because of small dairy farms going out of business, according to data from the Wisconsin Department of Agriculture, Trade and Consumer Protection.

"What part of this seems to be is this strange ... very damaging dynamic where banks are lending farms money to add more cows even when the price is very low because sometimes it looks better on paper for someone to be able to add more cows and get more out of their fixed investment," she said.

O’Connor calls the situation backwards. The central problem — and solution — lies in legislation to manage that oversupply, she said. Take the 2014 Farm Bill, which O’Connor compares to a car on the road without breaks.

"We have a systematic incentive for dairy farmers to produce more through a government subsidized insurance program," she said. "And at the 11th hour Congress actually removed the only mechanism (the market stabilization component of the Margin Protection Program) in that policy that would have encouraged farmers to slow down their production when prices were low."

That created a cycle where the only answer a farmer has to low prices is to produce more, she said.

"We have the really crazy specter of farmers losing money because prices are so low and being told by their bankers we'll only give you a loan if you add more cows," O’Connor said.

In the past, Congress has put the brakes on oversupply by setting a base price that diminishes when supply exceeds profitable demand on the market, or by scaling back on farm subsidies when the market doesn’t call for additional production, she said.

"It's only the farmer that is losing out because the market is flooded," she said. "Unfortunately in the United States we have some very powerful agribusiness interests lobbying against any kind of breaks."

Wisconsin’s cranberry crop, which has also seen overproduction, is planning to dump about 25 percent of the crop this year to help stabilize prices, an option not open to dairy farmers, O’Connor said. Yet ideally, the oversupply wouldn’t happen in the first place.

Many of Wisconsin’s farmers have also been hit by the Trump administration's trade wars, and while they didn’t start this farm crisis, O’Connor says they’ve thrown salt in the wound.

"The trade war that has been precipitated under the Trump administration is also a repudiation of the central strategy that we've had in agriculture for 30 years, which is produce like crazy and we’ll export the surplus, and we are reaping the bitter fruits of that right now," she said.