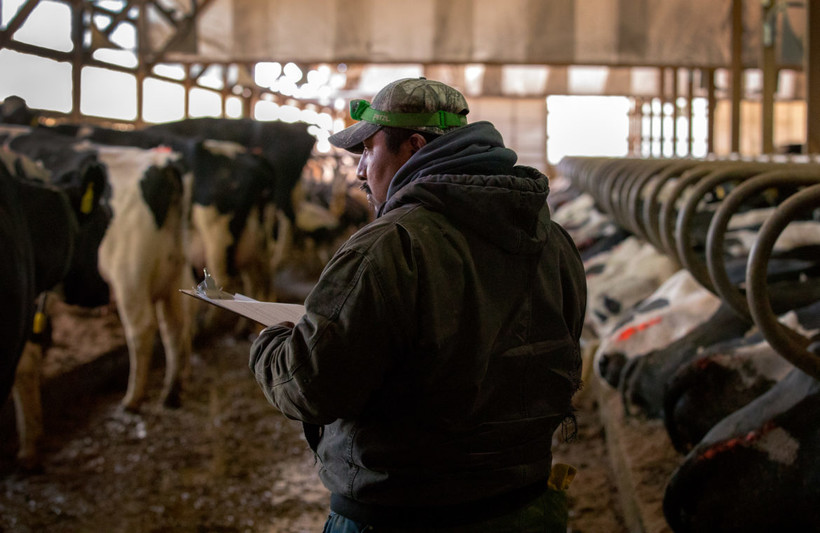 Gov. Tony Evers will use $50 million of federal coronavirus relief funding for direct payments to farmers.

The governor announced the Wisconsin Farm Support Program Wednesday. The release said farmers will apply for the aid through the state Department of Revenue and could receive payments as early as June.

A spokesperson for the state Department of Agriculture, Trade and Consumer Protection (DATCP) said the agency is still finalizing how much producers will receive and who will be eligible for the program.

In an interview with WPR, DATCP Secretary Randy Romanski said Evers wanted to help offset the impact of low commodity prices and lost sales on the state’s farms.

"Clearly COVID-19 has created unprecedented challenges for all of us but the dramatic swing in the supply and demand balance has really affected Wisconsin agriculture substantially," Romanski said. "So Gov. Evers, from the very beginning, has indicated that he thought agriculture should be included in receiving some of the COVID response funding from the CARES Act."

The federal Coronavirus Aid, Relief, and Economic Security (CARES) Act passed at the end of March and includes $150 billion in direct aid payments to state and local governments.

The state Legislative Fiscal Bureau estimates Wisconsin could receive about $2.26 billion of that funding based on its population, with some funding going directly to the city of Milwaukee, Milwaukee County and Dane County.

In April, eight Wisconsin farm organizations sent a letter to Evers to request $50 million in direct farm payments from the federal funding.

"We know that this amount will not cover the total loss to the food producers of this state, but it may sustain many farmers through the next few weeks as they regroup and reorganize their businesses and strive to keep the food supply chain intact in Wisconsin," the groups wrote in the letter sent April 21, 2020.

Kara O'Connor, government relations director for the Wisconsin Farmers Union, said the direct payments will be "very meaningful" to farmers.

"We have dairy farmers who thought they would get some relief in 2020 and just saw the bottom fall out from under them. We have flower growers who have had all of their wedding bookings canceled. We have livestock farmers who were selling to restaurants and those restaurants have been shuttered. So all across the spectrum of agricultural commodities, people are really hurting," O'Connor said.

O'Connor said her organization would like to see the new program be as inclusive as possible.

"That means that we’re focusing on all sizes, all commodity types," O'Connor said. "We shouldn't have a minimum size for a farm that is so high that we are missing thousands of farmers in the state who are really building local food economies."

The program will help food banks, pantries and other nonprofits adapt to new public health needs, like practicing social distancing or offering curbside pick-up or delivery services. The initiative will also help connect organizations with local food producers and processors in the state.

The new programs come a day after the Evers administration announced a $1 billion plan to increase testing and contract tracing across the state.