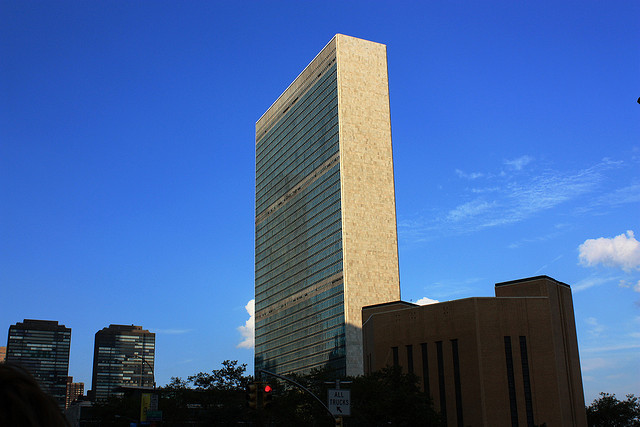 The headquarters of the United Nations. Photo: Prashanth Raghavan (CC-BY-NC-ND).

350 Madison Climate Action Team And Others Will Ride 18 Hours To Meet Up With Protesters In Central Park
By Chuck Quirmbach
Share:

More than 250 people from Wisconsin are headed to New York for a march Sunday ahead of a United Nations summit on climate change.

Environmental groups, including the 350 Madison Climate Action Team and the Sierra Club, have organized a bus ride from Madison to New York City for protesters that will depart on Saturday. Once they arrive after the 18-hour journety, the activists will join what may be 100,000 others in a march calling for more binding international agreements next year limiting greenhouse gas emissions.

Beth Esser will be among the Wisconsin activists joining the march. She said that her family, which includes her husband have two young children, has already taken steps to reduce its carbon footprint, such as reusing bags and driving a fuel-efficient car. But about 18 months ago, Esser said she realized that personally living a greener lifestyle wasn’t enough, and that she had to join others to call for a global effort against climate change.

Esser said that the Obama administration has taken some positive steps toward addressing climate change.

“However, Obama has repeatedly said that he has an ‘all of the above’ energy policy, which includes increasing our domestic production of dangerous tar sands and fracking natural gas,” said Esser.

Esser said that while she understands gasoline and coal are in high demand, she's convinced that more people can reduce their need for fossil fuels and that more energy can come from renewables.

Esser and many of the other activists from Wisconsin also face an 18-hour bus ride back from New York on Sunday night. She said it will then be up to other groups to pressure next week's U.N. summit to produce a favorable result.