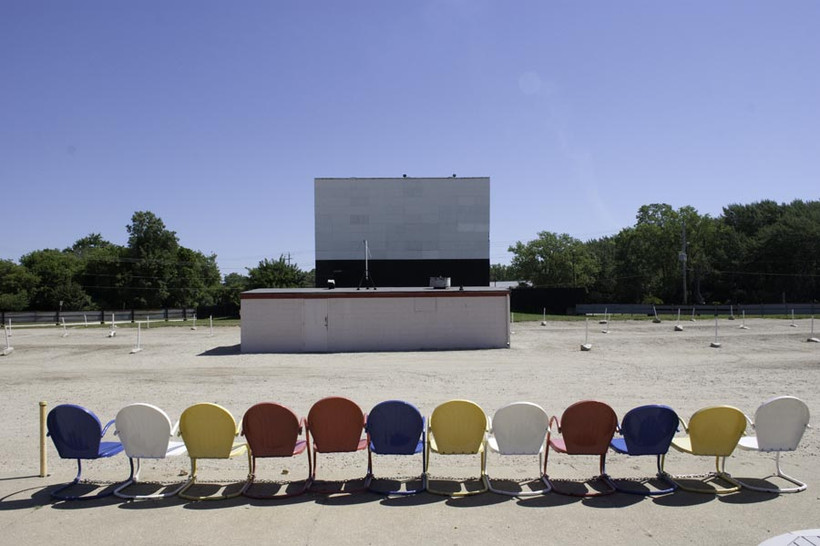 Chairs at the Keno Drive-In, which will be closing down at the end of the season. | Photo: areseedy.

As Wisconsin Drive-In Closes, How Are State's Remaining 10 Doing?

For 66 years, the Keno Drive-In Theater in Pleasant Prairie has entertained families, necking teenagers and film fanatics in southeastern Wisconsin.

The theater has screened thousands of movies, but this weekend, they’ll be showing their final two before closing the gates for good.

The closure has been a familiar narrative over the past few decades as drive-ins become scarcer and scarcer.  While the Keno ownership has been seemingly quiet about the reasons behind the impending closure, Wisconsin drive-in historian Charles Bruss said he believes the reason is one that’s threatening numerous others across the country: the conversion to digital projection.

“(Projecting) 35mm film has always been the standard for showing movies in theaters,” Bruss said.  “But over the past 10 to 12 years, digital has become the way that movie companies are going.”

The reason for that comes down to cost for these companies.

With digital projection, almost all of that cost is eliminated as theaters can acquire movies through a satellite download or a physical disc. Naturally, movie companies saw the potential for cost-savings and started asking theaters to make the switch from analog to digital projection.

“So, if you have multiple screens, you can see how costly it can get,” he said.

Drive-ins face an additional challenges as their projection booths are often stand-alone little buildings in the middle of the field.

“They also need to be heated, air-conditioned and sealed up completely because all the electronics that go with digital projectors are very sensitive to those kinds of changes,” Bruss said.  “So, for a drive-in, they’ll have to spend at least another ($5,000) just to get their booth up to speed.”

For now, movies are still being produced for analog and digital projectors, but the 35mm reels are getting harder to find.

“I’ve seen the Keno really struggling to get the movies that they want to get,” Bruss said.  “Movie companies are just not making as many prints so you basically have to wait or they’re not just making 35mm prints at all, and then you’re kind of shut out of the really big movies.”

With the loss of the Keno, Wisconsin is down to 10 remaining drive-in theaters.  Bruss said that for the most part, these theaters are doing pretty well and the majority of them have been able to make the jump to digital projection.

He said he initially had some worries about the Stardust Twin Drive-In in Chetek, but is confident the theater will be OK going forward.

“The owner had socked away a lot of money two years ago, but he had a very bad spring and had to burn through a bunch of the money he had saved up for the projectors.”

As a result, he was only able to go digital on one of his two screens.

“At least that ensures that he’ll be able to get movies for next year,” Bruss said.

The only theater that hasn't converted to digital is the Twilight Outdoor in Chilton, but Bruss said he has spoken with the owners and is confident they’ll soon be making the conversion.

Though there were some tough years in there, Bruss said he believes drive-ins have weathered the brunt of the storm and despite the rise of theater-quality TVs and on-demand movies at home, he sees a real hunger for drive-in movies.

“Back in the '80s, drive-ins really took a hit,” Bruss said.  “Their numbers went down by well over a thousand over the course of a decade.”

He blamed some of that on the rise of cable TV and VCRs, which revolutionized home entertainment, but the novelty might now be wearing off.

“Nowadays, I think families have really found the drive-in again and the experience of getting together as a family, getting out of the house, and going to the movies.”

He pointed to Chilton’s Twilight Outdoor Drive-In as a success story, which opened in 2011 on the site of a former Wal-Mart -- a little bit of irony that’s certainly not lost on Bruss.

Bruss also said people are attracted to the experience of a drive-in because of just that: it’s an experience.  He noted that with indoor theaters, movie-goers tend to show up, watch the movie and leave. But with drive-ins, it’s not uncommon for people to show up hours before the movies start to toss around a Frisbee or play on the playground equipment in front of the screen.

“And of course, you get two movies for the price of one,” he said.  “It’s almost more economical for a family to go to the drive-in as opposed to going to an indoor theater.”

He also said that each drive-in seems to have its own personality, whereas indoor theaters tend to feel pretty homogenous.  That can be a double-edged sword, however, as it makes it all the more difficult when a drive-in like the Keno closes.

“Memories are made there,” Bruss said.  “Maybe you go there as a kid or grow up watching all the movies.  When a drive-in gets torn down, it’s kind of like part of you gets ripped away.”

Those looking for one last shot at making memories at the Keno can catch a double feature of “Ouija” and “As Above, So Below” this week. More information can be found at the Keno’s website.