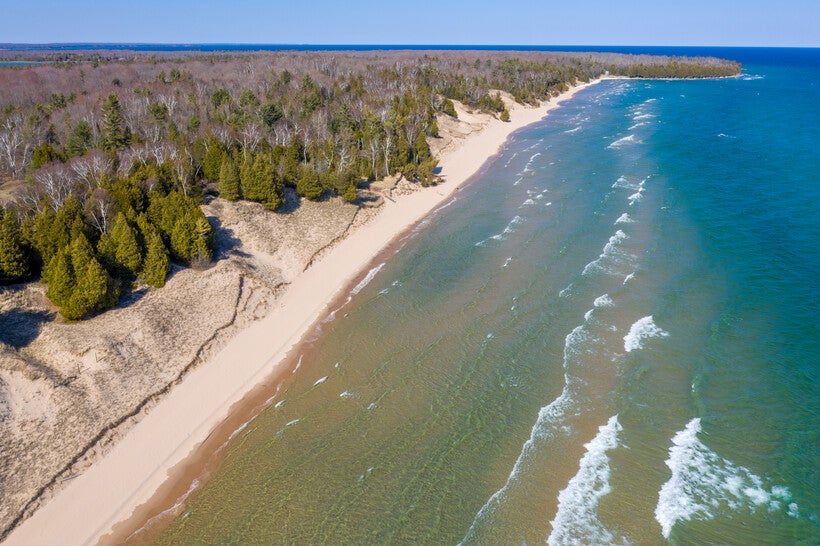 The Wisconsin Department of Natural Resources is asking the agency to redesignate lakeshore areas of Door and Kenosha counties. The changes would mean less restrictive requirements for any new large-emitting facilities that could contribute to ozone pollution.

Shoreline areas of Lake Michigan have long struggled with poor air quality due to ozone pollution. Ozone pollution often occurs in the summer when air pollutants like nitrogen oxides and volatile organic compounds from industry, power plant or vehicle emissions interact with heat and sunlight.

Smog can worsen asthma and increase the risk of chronic health issues like emphysema or lung cancer.

Grant Thomas, corporation counsel for Door County, said the "nonattainment" designation creates a poor public perception of the county that could harm the region’s tourist economy. Even so, he said county officials intend to follow the science regarding the EPA’s decision.

"Emission sources within Door County cannot and have not made a significant contribution to the ozone concentrations in Door County or in other areas," said Thomas.

More recent data suggests the area is meeting air quality standards, and the EPA approved a previous request to designate the area as "attainment" or clean in June last year. However, federal regulators expanded the list of areas that aren’t meeting smog regulations in July, including for Door County.

As a result of the change, the state is asking the EPA to redesignate the expanded area of Door County north of Sturgeon Bay Canal.

"We found that we should have done a larger designation in the first place, so we're essentially doing a secondary designation for that expanded portion that was affected by the court decision," said Doug Aburano, the EPA’s air programs manager in Region 5.

The DNR submitted the redesignation request on Jan. 5, and Aburano anticipates the request will be approved as the county’s air monitor has shown improving air quality.

Chelsea Chandler, climate solutions director for Clean Wisconsin, agreed that data from 2019 to 2021 shows Door County is meeting the standard. She highlighted the standard is derived from a three-year average of ozone concentrations, which showed readings exceeded the standard in 2020.

Chandler said it’s best to be as protective of public health as possible.

"We're two years into a global pandemic, and we know that the people that have chronic lung diseases like asthma are that much more likely to become really ill and hospitalized," said Chandler.

She also noted that Black, Indigenous and Latino communities are more likely to face those conditions and live near areas struggling with reduced air quality.

In Kenosha County, the DNR is asking the EPA to redesignate its lakeshore area as meeting the agency’s older 2008 standard. It’s part of the Chicago "nonattainment" area that has failed to meet smog regulations, which have led to more requirements for facilities to reduce pollution.

The DNR noted that emissions of nitrogen oxides and volatile organic compounds that can form ozone pollution dropped by 30 percent and 26 percent respectively between 2011 and 2019.

The decline is primarily due to reduced pollution as a result of state and federal programs, lower vehicle emissions and the shutdown of the Pleasant Prairie power plant in 2018. The plant’s closure is expected to reduce nitrogen oxide emissions by more than 2,600 tons per year.

"We don't have a lot of local sources in Kenosha. We do have some, but a lot of that is coming more from that more heavily industrialized area," said Jason Treutel, chief of the DNR’s air quality planning and standards section.

Scott Manley, executive vice president of government relations for Wisconsin Manufacturers and Commerce, said a change in Kenosha County’s status wouldn’t make much difference since the area would still be required to meet the EPA’s more stringent 2015 standard.

"It will still be difficult to cite a business there that has any ozone precursor emissions," said Manley.

He said any major facility with large emissions would face costly pollution controls.

The DNR submitted its request to revise the air quality designation for Kenosha County on Dec. 3. The EPA is reviewing the state’s requests for Door and Kenosha counties. The agency anticipates it will issue a decision within the next six months.