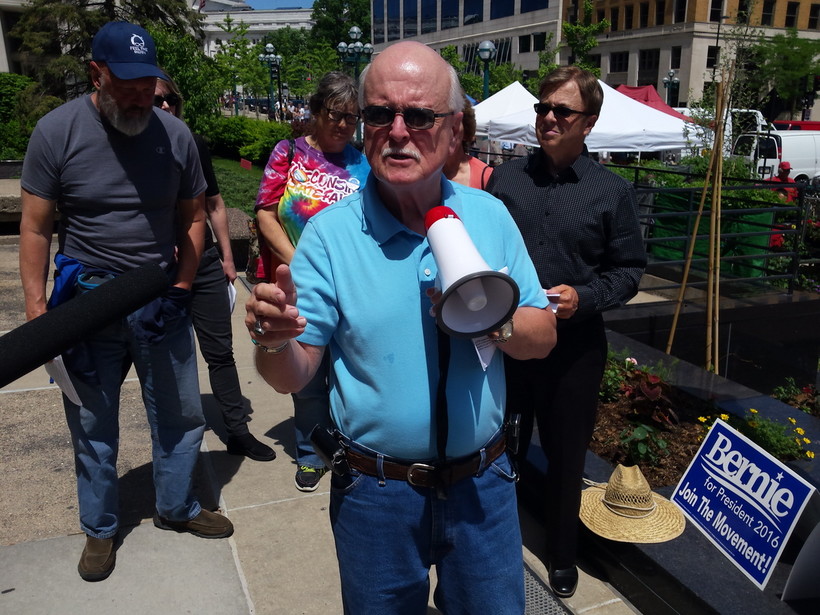 Buzz Davis of Madison and other Bernie Sanders supporters are backing a resolution that calls for the end of Democratic superdelegates.

Nonbinding Resolution Up For Vote At State Party's Convention Would Abolish Superdelegate System By 2020
By Shawn Johnson
Share:

Wisconsin Democrats will vote on a resolution at their state party convention this weekend that calls for the end of the superdelegate system, a move being pushed by supporters of Vermont U.S. Sen. Bernie Sanders.

Superdelegates are only involved in the Democratic presidential nomination process.  They include elected members of Congress, state party leaders and other prominent Democrats. Unlike pledged delegates, which are awarded to candidates based on how they perform in state primaries and caucuses, superdelegates can support whomever they choose.

Sanders supporter Buzz Davis told reporters at a Madison news conference that superdelegates raise the prospect that a candidate who wins the popular vote in Democratic primaries could lose the nomination.

"It's a corrupt system," Davis said.  "It's designed just to be sure that democracy will not be stolen by the people."

Dan Thompson, another Sanders supporter from Madison, said regardless of who wins the Democratic primary, superdelegates need to go.

"You know, the Democratic Party seems to be ironically named," Thompson said.  "People who run the place are intent on giving an undemocratic result. We don't want that."

Sanders won Wisconsin's Democratic primary by roughly 13-percentage points in April, but he has so far netted only five delegates in the state. That's partly because six of Wisconsin's superdelegates had already promised their support to Clinton. They include U.S. Sen. Tammy Baldwin, U.S. Reps. Gwen Moore and Ron Kind, and DNC members Christine Bremer Muggli, Michael Childers and Martha Love.

One Wisconsin superdelegate, state Rep. David Bowen, announced after the primary that he would support Sanders.  Wisconsin's three other superdelegates have not said who they support.

Democrat Russ Feingold, who would become a superdelegate if he wins his U.S. Senate campaign this November, told reporters at a separate event in Madison that the Democratic nominating process needs reform.

"I think it would be much more in the spirit of a populist Democratic party that we have a different, more direct system," Feingold said.  He did not say whether he supports the resolution up for a vote Saturday.

The proposal is a non-binding resolution, meaning it's essentially advice for the national Democratic Party. It would not take effect until 2020.

Wisconsin Democratic Party Chair Martha Laning, herself a superdelegate, has not declared which candidate she'll support in the primary. She also wouldn't weigh in on whether she supports this resolution, saying it was up to delegates to decide.

"It's their voice that is most important," Laning said.  "We'll hear on Saturday how it turns out."

A separate resolution being pushed by Sanders supporters would call on 2016 superdelegates to cast their votes proportionally rather than for the candidate of their choice. That resolution faces a more difficult path at the convention because it was not previously approved by local Democratic parties at the county and congressional levels.