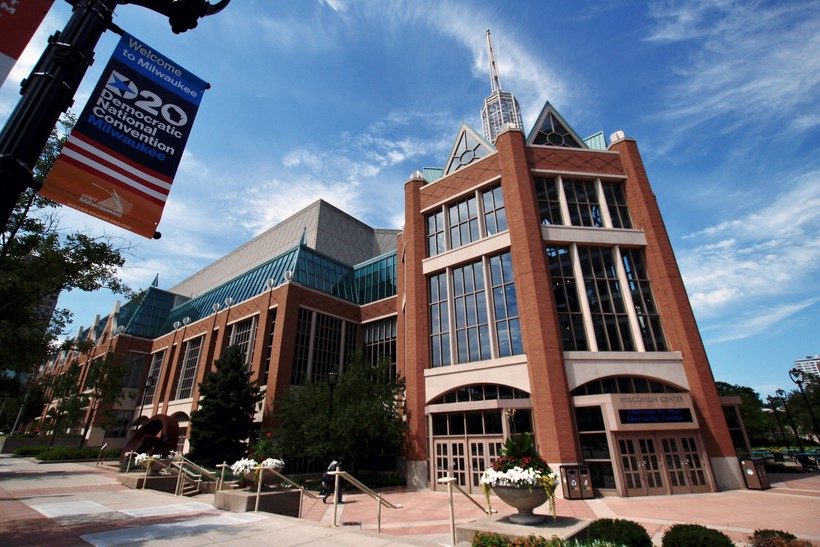 This Aug. 13, 2020 photo shows the Wisconsin Center in downtown Milwaukee, the location of a scaled down Democratic National Convention. Carrie Antlfinger/AP Photo

National Convention Was Expected To Bring 50,000 People To Milwaukee
By Laurel White
Share:

As Wisconsin Democrats gathered Monday morning for a "virtual breakfast" to launch a drastically scaled-back Democratic National Convention, they blamed President Donald Trump's handling of the corornavirus pandemic for the convention’s transition to a mostly virtual event.

U.S. Sen. Tammy Baldwin was one of several top state Democrats to speak at the online event, the first of many scheduled for this week. The convention was once expected to bring about 50,000 people and $200 million to Milwaukee, but its in-person agenda in the city has been significantly reduced because of COVID-19 concerns.

The event now includes mostly virtual gatherings and speeches streamed from other parts of the country. Presumptive Democratic presidential nominee Joe Biden will deliver his remarks from his home state of Delaware.

"The mismanagement and total, utter failure of leadership during a pandemic is laid out starkly — and it’s why we’re, responsibly, holding our convention virtually," Baldwin said.

The senator noted Trump will hold an in-person campaign event in Oshkosh Monday and that Vice President Mike Pence is scheduled to campaign in person in Darien on Wednesday. She called the events "unsafe."

"I don’t know if they’ll be wearing masks," Baldwin said. "I hope they follow the mask guidelines we have in our state."

Baldwin's comments echo Gov. Tony Evers’ sentiment last week that the president and vice president should "wear a freakin' mask" when they campaign in Wisconsin.

Evers showed the camera his Egg McMuffin breakfast sandwich, a daily standard for the governor.

"It’s not what we planned, but this is going to be a great convention," he said.

Evers is scheduled to speak at the convention during its primetime schedule on Wednesday evening. Moore will speak Monday evening, and Baldwin is scheduled for Thursday.

During his remarks, Barrett said he had been looking forward to welcoming convention attendees to Milwaukee for years.

The mayor, speaking to attendees from a remote location in a room by himself, welcomed virtual convention attendees "to Milwaukee" regardless.

"I wish you were here spending all of your money, but you can come at any time," he said. "We’re going to leave the lights on."