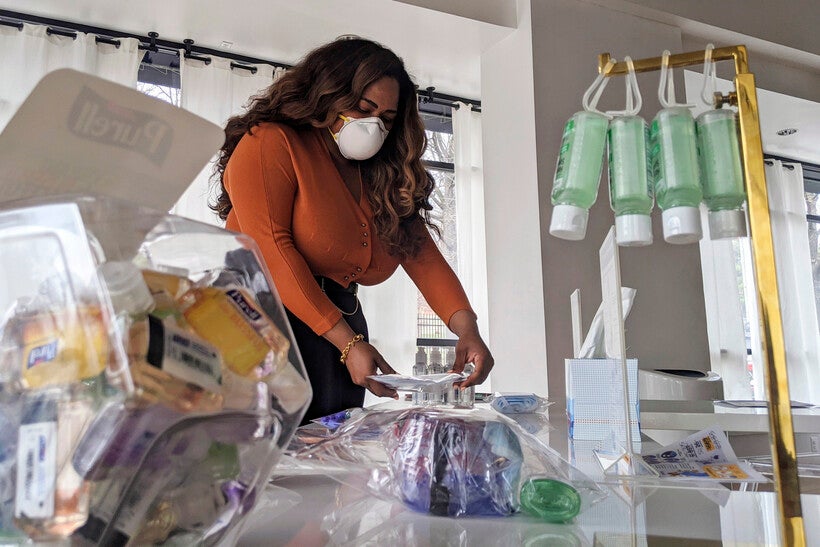 Adilisha Patrom, owner of a co-working and event space next to Gallaudet University, organizes face masks, hand sanitizer and other supplies inside her pop up shop on Thursday, March 5, 2020, in Washington. Inside her storefront, she displays different face mask models and hand sanitizer bottles alongside information from the Centers for Disease Control and Prevention. Nathan Ellgren/AP Photo

There have been 27,286 positive cases of COVID-19 in Wisconsin as of Saturday, according to the state Department of Health Services. That's an increase of 539 cases from the day before.

According to health officials, there were 777 deaths as of Saturday, up from 766 deaths recorded on Friday.

DHS reported 515,723 total negative tests for the coronavirus, an increase of 8,555 from Friday to Saturday.

Seventy-nine percent of people who have tested positive for the virus in Wisconsin have recovered as of Saturday, according to DHS. Three percent have died.

Wisconsin's daily testing capacity — based on the availability of test supplies and adequate staffing — has grown from 120 available lab tests in early March to 18,425 as of Saturday. The number of actual tests reported on Saturday was 9,094.

An increase in testing is one reason for the increase in the number of positive cases. The percentage of positive tests increased to 5.9 percent on Saturday — the highest it's been since May 29 when it was 5.4 percent.

La Crosse, Trempealeau, Milwaukee, Lafayette and Western counties have the highest case rates in the state, all with over 100 cases per 100,000 residents reported over the past two weeks.