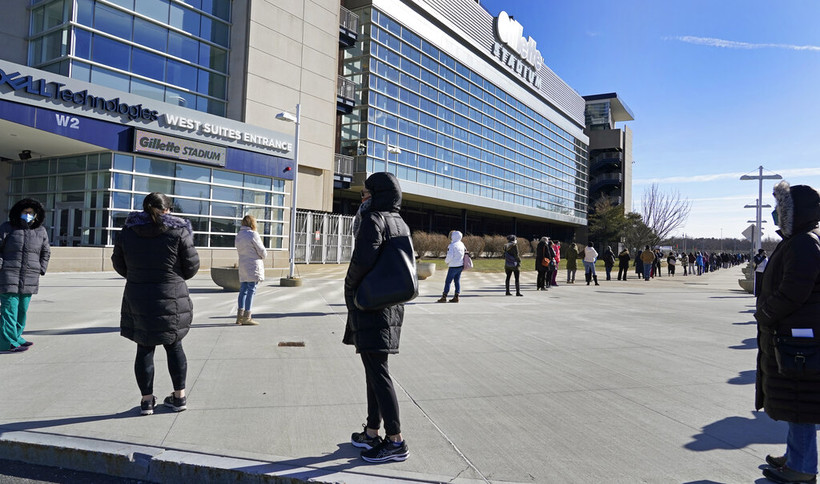 People wait in a socially distanced line to get their COVID-19 vaccinations at Gillette Stadium, Monday, Jan. 25, 2021, in Foxborough, Mass. Elise Amendola/AP Photo

Wisconsin COVID-19 Cases Trend Down As State Confirms Teachers, Essential Workers Will Get Next Vaccines

The weekly rate of new COVID-19 cases in Wisconsin is at a seasonal low, according to the latest data published by the state Department of Health Services. But health officials say that's not a sign to stop taking the disease seriously.

DHS reported 1,301 new cases of the disease Tuesday, bringing the average for the past seven days to 1,545 daily cases.

"That's lower than it has been in months, and it is still far, far too high," said DHS deputy secretary Julie Willems van Dijk. "Stay home, wear a mask, physically distance, wash your hands, and get tested if you have symptoms or have been exposed."

One week ago, the seven-day average was 1,895 daily cases.

There were 54 new deaths from COVID-19 reported Tuesday. On Tuesday, 4,147 tested negative.

Of the people tested for COVID-19 over the past week, 20.1 percent were positive for the disease, according to DHS. That rate has been on the decline, and is at its lowest since early October.

According to DHS, 846,300 doses of coronavirus vaccine have been allocated across Wisconsin as of Tuesday, an increase of 66,500 from a week ago. Currently, 362,505 doses of the vaccines have been administered, and 69,077 people have received both shots, completing the vaccination series.

Teachers, grocery store employees, child care workers and other essential worker groups will be in the next to get vaccinated in Wisconsin.

"We want everyone who wants a vaccine in Wisconsin to get a vaccine, and in the future that will be a reality, but with our current federal allocation, this is not a reality today, so we need to prioritize," said Willems Van Dijk.

According to the Wisconsin Hospital Association, there were 772 COVID-19 patients hospitalized as of Monday. A total of 23,883 people have been hospitalized because of the disease, or 4.5 percent of all positive cases.

The latest figures bring the overall total of positive cases in Wisconsin to 535,218, according to DHS. A total of 5,753 people in Wisconsin have died from COVID-19.

Wisconsin's daily testing capacity — based on the availability of test supplies and adequate staffing — has grown from 120 available lab tests in early March to 59,275 as of Tuesday. The number of actual people with new test results reported Tuesday was 5,448.