Country music historian Bill Malone has been a fan all of his life. The first music he heard was old country songs sung by his mother, like "I'll Be All Smiles Tonight" and "Little Rosewood Casket."

Malone, who hosts a weekly country music show on WORT-FM in Madison, is the primary historian in Ken Burns new documentary "Country Music," airing on PBS on Sunday.

A country musician in his own right, Malone spent 25 years teaching at Tulane University in New Orleans and in 1968 published the book, "Country, U.S.A," a major source for the upcoming documentary.

Malone says the documentary is coming at a crucial time.

"It's no secret to anybody that as a nation we're in crisis with such a polarized society and so many anxieties," he said.

"It's important for people to remember that there's something good in our society," Malone continued. "There's a music that has drawn up on many cultural resources of the United States and a music that you know documents the life and experiences of a major segment of the American public."

In a sense, country music documents American history, Malone said, but above all, it’s about people’s emotions.

It's also music people can relate to, he said. The melodies are easily humable and the words are descriptive.

The women and African Americans, for one, who played an instrumental role in the making of country music are often overlooked in it's history — and even present, Malone said.

"The women were not always that prominent in the early years of country music, but they were there," he said. "And ... one performer after another can testify to the role that African Americans have played in their lives and music."

Jimmie Rodgers (who is widely considered the father of country music) for example, borrowed heavily from black railroad workers who worked for his father and street musicians, Malone said.

The documentary, full of rare photographs, home movies and footage from festivals, covers the early days of the music as it emerged from its folk roots, to when it was first commercialized and took off, he said. 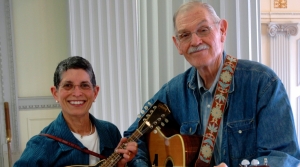 Music historian Bill Malone has been playing and writing about the country genre for more than 50 years. Now, he's one of the voices guiding the new Ken Burns documentary Country Music. We talk with him about being a part of the production and what's made country music so important to...