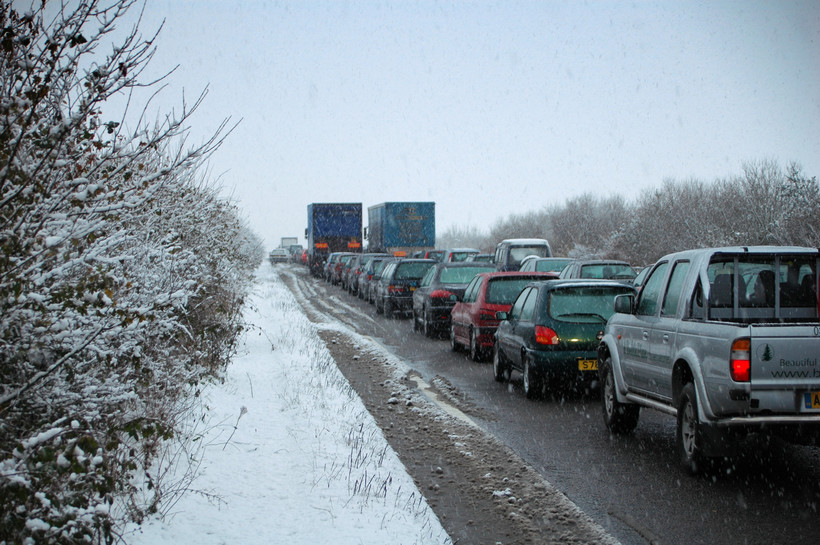 For the second straight year, traffic fatalities are down in Wisconsin. Photo: tico_24 (CC-BY)

Fatality Count Would Be Lowest State Has Seen Since 1943
By Galen Druke and Scottie Lee Meyers
Share:

For the second straight year, traffic fatalities are dropping in Wisconsin and the state is on track to record the lowest number of road deaths since 1943, a transportation official says.

According to Wisconsin Department of Transportation data, there have been 482 fatalities so far this year. By comparison, there were 517 fatalities last year — a total that also marked a historic low.

David Pabst, the director of the Wisconsin Department of Transportation Bureau of Safety, attributes the downward trend that's being observed across the Midwest to a number of factors: highway engineering like roundabouts and shoulder rumble strips, traffic management, increased seat belt usage, decreased incidents of drunken driving, and safer cars with multiple airbags and electronic stability control.

“We’re seeing safer cars, safer roads. But people are being safer too. Wisconsin is buckling up more than they ever have,” said Pabst.

Pabst said national and statewide marketing campaigns, as well as Wisconsin laws that allow law enforcement officials to stop drivers solely for not wearing a seat belt, have helped increase belt usage over the years.

That said, Pabst said Wisconsin still has room for improvement when it comes to seat belts. Wisconsin lags behind the rest of the region with a usage rate of 85 percent — one point shy of the 86 percent national average.

According to Pabst, another pressing issue in road safety is people driving while distracted, which has especially become a problem with the proliferation of cell phones.

“Any time you’re on the phone, whether you’re just holding the phone or using a hands-free headset, you are cognitively distracted and statistics show that you are four times more likely to be involved in a crash. If you add texting into that mix … it’s a recipe for disaster,” said Pabst.

For example, Pabst said that a simple text takes five seconds to write and send.

“Five seconds on the road at highway speeds — that’s the length of a football field that you’re not looking where you’re supposed to be,” he said.

When asked if the use of hand-held phones should be banned in the state, Pabst said that decision is up to the voters, but that any measure that could reduce distracted driving should be seriously considered.

Another key factor in making Wisconsin’s roads safer is stemming drunken driving. While alcohol-related fatalities have fallen in Wisconsin during the past decade, the state still stands out as having the highest percentage of drunken drivers in the country and being the only state in which a first drunken driving offense is not a criminal offense.

Pabst said that the development of SafeRide programs and a clampdown by police officers has helped reduce the number of alcohol-related fatalities on the road. His advice heading into the holiday season is to be more alert when driving late at night, since there’s a higher risk of there being drunken drivers on the road.

He also urged people to designate a driver in advance of drinking or to just stay home.

“Encourage everybody at your party, and remind them at the beginning, that if you’re unable to drive or you feel even slightly buzzed, let’s just stay here. Let’s just stay and enjoy the moment and drive home later in the morning,” said Pabst.

The state is on the cusp of recording its historically low road fatality total at a time that is also one of the biggest traveling seasons of the year. AAA projects that over 1.9 million Wisconsin residents will be travelling 50 miles or more from home during the year-end holiday season.

Here's a chart that shows annual traffic fatality and fatal crash totals for the past five years:

Traffic Fatalities and Fatal Crashes in Wisconsin by Year